“You’ll be carrying the stink of the streets with you for the rest of your life! “
– Max

SYNOPSIS: A former Prohibition-era Jewish gangster returns to the Lower East Side of Manhattan over thirty years later, where he once again must confront the ghosts and regrets of his old life. – via IMDB

You know, I am not going to pretend that I didn’t have high hopes for this one. I did. Old school organised crime and Robert De Niro? Uhm, yes, sold. Well. Well. Uhm, yeah. Okay, I will just come out and say it. I didn’t love it. I wanted to, but I didn’t. There was just so much here that put me off of it completely.

Once Upon A Time In America treats women horifically. Like fuck my life, what the hell was that?! I am going to address this as my primary issue because, well, you can’t watch this movie and miss that. I was horrified. Women were objects there for sex and amusement, and didn’t really stand as their own characters. Just watching how they get treated by the men of the cast really makes you hate the men of the cast, and no storytelling can save it. For instance, this movie features one of the most drawn out, disgusting rape scenes I have ever had the misfortune to sit through. As if I didn’t dislike Noodles enough, that was enough to make me hate him, and there was no redeeming him. The movie tried, too, like it was just a thing, and I was horrified by how meek Deborah was when seeing him all those years later, like there was still this fire between them. Fuck that. Not to mention Carol at the break in, and Peggy in the beginning of the movie. DISGUSTING.

Not to mention the story was skinny, too. I had to sit down six different times to try and get through this movie. I have no issue with a movie coming in with a super long runtime, as long as the story is good and it is all put together well. Here, I didn’t feel that the time was utilised correctly. There were times where it was good to watch Noodles and Max together, even though what they are up to is dodgy (because that’s how organised crime rolls, but you can enjoy the show), but then there is rape, gratuitous sex, violence, and lots of rambling with no story to fill it, and the story that was woven through the almost four hour runtime? Pretty fucking thin, and I didn’t appreciate that at all.

Some of the performances were clunky, too, and I don’t care who has what to say on that. Some of the performances were excellent – De Niro, for instance, sickened me to my core, but portrayed his character really well. Jennifer Connelly was great, and McGovern hit with a bang. Woods was solid, too. I was also not a fan of the extremely limited music used throughout the movie. It was annoying and grating. Of the entire movie, I must be honest and say I preferred watching the half when they were kids (even though the acting was truly godawful, the story was better), pre-prison for Noodles, even though there were some super issues with it, too.

While lauded as one hell of a gangster film, I was immensely disappointed with Once Upon A Time In America, and will not be rushing to rewatch it. Horrific treatment  of women, a stupidly skinny story, and a mixed bag of performances, I found this to be disappointing and excessively long for what it is.

” These eyes will deceive you, they will destroy you. They will take from you, your innocence, your pride, and eventually your soul. These eyes do not see what you and I see. Behind these eyes one finds only blackness, the absence of light, these are of a psychopath.”
– Dr Sam Loomis

SYNOPSIS: Young Michael Myers is committed to Smith’s Grove after the brutal murder of his mom and sister’s boyfriends, and his sister Judith. After being there for roughly 17 years, he returns to his home town of Haddonfield in search of one of the only people he has ever cared about, his baby sister Laurie Strode. As he is tracked down by Dr. Sam Loomis he will kill anybody who gets in his path. – via IMDB

You know, I have always felt that this movie gets way too much hate! I know Zombie is pretty divisive for people, but I am a big Zombie fan, that’s for sure. When it comes to his movies, I always respect what he is going for, whether it works out as well as you would hope or not. Zombie’s Halloween tries to give a more psychologically sound explanation as to Michael Myers’s murderous antics, and I appreciate what he was going for. The pre-psychopathic warning tendencies/indicators were shown in their full glory here, as well as the crappy home situation that Michael found himself in (definitely tacky to boot, not the regular middle class family he was from originally). Zombie’s rendition is also a hell of a lot more brutal, gory, and bloody. Plus Michael’s first attack on that kid? It was sinister. Not to mention the extremely graphic rape scene that invaded our screens – that was OTT! Daeg Faerch was a really creepy pick to play a young Michael. I also enjoyed the soundtrack quite a bit, and I think the film was shot really well. However, Halloween is a movie filled with awful characters I just could’t give a crap about, even our new Laurie Strode, even our new Dr Loomis, and that is a pity. There wasn’t really anyone to root for at all. It was cool to see Danielle Harris return to the series (totally different character), but I felt like a total pedophile. Seriously – four movies ago she was a nine year old girl, and here she had her rack out on display. It was madness! Also, I was not a fan of the dialogue – all constantly cussing, and everyone seemed a little… common? You can tell that Zombie loves the original movies, and there are a lot of throwbacks here, but Zombie still tried to make it his own, and his mark is evident. I didn’t love the fact that the movie is littered with a lot of tacky moments, and the modernisation of this did not really help the cause. Anyway, not nearly worth the hate that it gets, and it is a decent watch all around, if I am being honest. Not the best Myers film, but a solid one nonetheless. 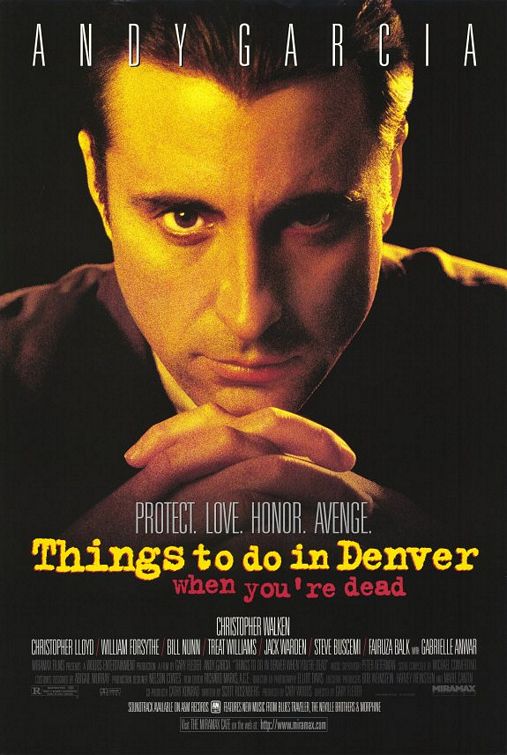 “Remember when you was a kid and you would spend the whole year waiting for summer vacation and when it finally came it would fly by just like that?”
– Easy Wind

SYNOPSIS: Jimmy the Saint has left the underworld. When ex-boss calls him in and asks for a lucrative “favor,”Jimmy accepts and enlists the aid of former gang members. Unfortunately, things go awry and they all find themselves on the crime lord’s hit list. – via Rotten Tomatoes

Yep, there’s a mouthful of a title for you! While there are certainly far better mob movies to watch out there, it cannot be denied that this was quite entertaining, though it fell incredibly short of the mark it had set up for itself. The movie boasts a pretty good cast, and they all have pretty damn good performances and make it well worth the watch. Andy Garcia plays a great mobster, and Jimmy the Saint was an ex-gangster I really admired, not to mention the charm he oozed. I mean wow, the man was smooth and suave. Hot! Yes, can you tell I was a fan of his character? Garcia is always worth a watch in my opinion. The dialogue and writing is snappy, reminiscent of a Tarantino flick (apparently this was written pre-Reservoir Dogs though). If you like that quick wit and all, this will be something to enjoy.  At least I finally understand “Boat Drinks” (Eric and Mark)! I really liked the way that this all came together, and while not the greatest movie of all time, I cannot understand why it is not more well known, it’s a solid watch. Christopher Walken may not have been his most awesome self in here, but fans of his will enjoy his appearance nonetheless. Christopher Lloyd was very good, and the relationships between all these crooks was a solid one and nice to watch. Steve Buscemi’s Mister Shhh, man of few words, gave me a few laughs. Totally cuckoo crazy, but was still more organised and together than Critical Bill. Yes, all the character names are that weird, and it is alright. It grows on you (if you don’t like it from the off). I had fun with this, and I am sure others will too, as long as you aren’t expecting the next Casino or Reservoir Dogs, you will be just fine.

Beware: The trailer is a total spoiler – the whole movie is pretty much squeezed in there.