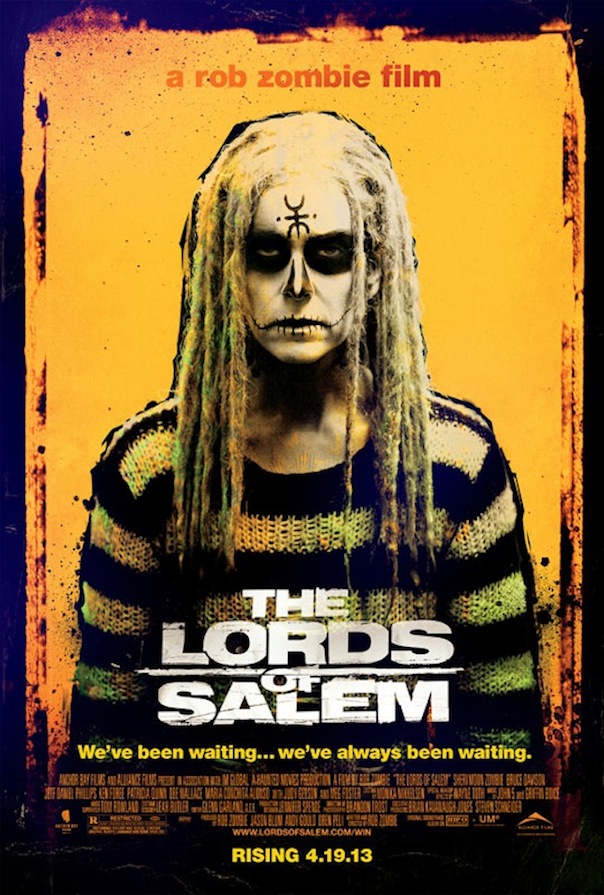 “On a rare occasion, a special child appears.”
– Megan

In the 1600’s, Reverend Jonathan Hawthorne (Andrew Prine) is intent on ridding the world of the Salem witches. Naturally, a wicth hunt would ensue, and he eventually rounds them all up. They suffer immensely at the hands of him and his cohorts, and are rid from the world for good. However, a deathbed curse from Margaret Morgan (Meg Foster) for the future women of Salem and Hawthorne’s descendants could be far worse than he anticipated.

Heidi Hawthorne (Sheri Moon Zombie) is a radio DJ in the small town of Salem, Massachusetts. Her partners is crime are Herman ‘Whitey’ Salvador (Jeffrey Daniel Phillips) and Herman Jackson (Ken Foree), and together they are the Big H Radio Team. Heidi receives a package at the radio station, and it contains a “gift” from the Lords. The record has some freaky sounds on it, and soon they play the band on air, but the record plays backwards. Their guest on the station, Francis Matthias (Bruce Davison), is an expert and published author of the Salem Witch Trials, and he begins digging around more in depth into the town’s history, as well as the inhabitants and their family lines.

Heidi’s world soon starts to slide. She is not one hundred percent sure what it is, but her head is being messed with. Their is no new tenant in apartment five, though she knows that she saw someone there. The recordings of the Lords of Salem, as they were dubbed, seem to have affected the women in town. Heidi is experiencing the flashbacks, and she is not looking good. Whitey starts to worry that she may have slipped back into her druggie ways. Hallucinations and flashbacks plague her, crippling her mind more and more. Another wooden box arrives at the station from the Lords, containing everything they need to host their massive gig – posters, tickets, the works. The Big H listeners are loving the Lords of Salem.

Heidi’s landlord and her sisters, Lacy Doyle (Judy Geeson), Megan (Patricia Quinn) and Sonny (Dee Wallace) take a direct interest in Heidi, and how they plan to use her to resurrect Satan and Morgan. However, Heidi is still fighting to stay in her place, and the three sisters are fighting to have her no matter the cost, and they will not let anything come in their way and stop them. The ancient curse seems binding, but will Heidi be able to shake it, survive it, emerge the victor? Or is she doomed to suffer for her ancestors and their mistakes?

I would rate Lords of Salem 6/10. It was not a bad movie, and it was visually beautiful to look at (all the time), it just felt at times things were a little jumbled. It had creepy looking things to see, but the film was not scary. It is very reminiscent of old-school horror, and that I have no problem with. The soundtrack was awesome (yes, I am a John 5 junkie). I don’t understand why so many people negatively commented on Sheri Moon Zombie being too old for her role (I heard that from a lot of people). She was pretty much where she was supposed to be – she was not supposed to be a young, sprightly spring chicken. She was supposed to be a seasoned but recovering drug addict who is putting her life back together and working at a radio station. I don’t know why people thought she was supposed to be extremely young? Or I missed it and pegged her age and life experience (as hinted at) to belong to someone more mature. But irrespective of all of that, the film was not bad. I was slightly let down, because this film was seriously hyped up, but just to see the look of the film I would watch it again. The film content was a lot more serious than anything we have really seen from Rob Zombie in a while, and that was really cool.