SYNOPSIS: “I can’t ever be the blazing star that Iris was. I’m still just a cold, dark satellite orbiting a star that went super nova.”

Andria’s twin sister, Iris, had adoring friends, a cool boyfriend, a wicked car, and a shelf full of soccer trophies. She had everything, in fact—including a drug problem. Six months after Iris’s death, Andria is trying to keep her grades, her friends, and her family from falling apart. But stargazing and books aren’t enough to ward off her guilt that she—the freak with the scary illness and all-black wardrobe—is still here when Iris isn’t. And then there’s Alex Hammond. The boy Andria blames for Iris’s death. The boy she’s unwittingly started swapping lines of poetry and secrets with, even as she tries to keep hating him. – via Goodreads

I picked this up because it was recommended to me if I like John Green. So I checked it out, expecting something more like his work, and got Dreaming of Antigone, which I would not say is the not quite the same. Definitely a young adult novel, that’s for sure, and had me thinking “teenagers” more often than not due to numerous different incidents. I think the primary one was the falling in love in like, two days, like. I am not saying that in a derogatory sense, just stating that this book distinctly highlights the thinking pattern of kids. That was just a bit crazy. Not because it has never been seen before in a movie/novel, but because of the history shared by Andria and Alex. It’s rough, supposedly, and if that were real life, it would have been super hectic. The book tries to touch on exceptionally heavy themes, like drug addiction, guilt, medical conditions, resentment, dealing with loss, suicide, etc. but just didn’t handle these themes with as much finesse as it hoped to, and it actually quite soft about the issues, if we are being honest. It felt like they had been glossed over, more than anything. The characters are flat and the story is very, very predictable, which is a bit of a disappointment. Andria is not a character that I liked at all, she just seemed too detached from everything that was going on around her, and the whole thing with Alex was just a bit weird because it all went down so fast. As I said, they have some heavy history that seems to just disappear in a heartbeat, or a few lines of poetry. This was the type of relationship that was a bit sketchy to start with, and the rush job did nothing to make it seem more okay. Despite these drawbacks, the novel is a quick read and flows well, but definitely is not the story it could have been. It didn’t pack an emotional punch, and does not stand out after the fact at all. It did not get me thinking about anything, either, which is what I would have expected from a book dealing with the issues that this one touched on. I don’t know, maybe I am just harder to please, what with not being sixteen anymore and all that.

SYNOPSIS: On a bitter January evening, three people are found murdered in the isolated Blackbird hotel.

Best friends since childhood, Eric, Rory and Celia have always been inseparable. Together they’ve coped with broken homes and damaged families, clinging to each other as they’ve navigated their tenuous lives. Their bond is potent and passionate—and its intensity can be volatile.

When the trio decides to follow Celia’s dream of buying and renovating the Blackbird, a dilapidated hotel that sits on the perilous cliffs of Jawbone Ridge, new jealousies arise and long-held suspicions start to unravel their relationship. Soon they find themselves pushed to the breaking point, where trust becomes doubt, longing becomes obsession, and someone will commit the ultimate betrayal.

An unflinching story of ambition, desire and envy, The Undoing traces the events leading to that fateful night, revealing the intimate connections, dark secrets and terrible lies that wove them together—and tore them apart.  – via Goodreads

Wow. I did not expect to love this one. The write up looked like something I would enjoy, but instead I got to read a book I got sucked into, whose pages reeled me in and held me hostage. I was captivated from the off, and fascinated throughout. The Undoing is a dark tale, a story with substance, with realistic characters who are flawed and broken and oh, so human. I think that the content of the book might make a lot of people uncomfortable, and I think that might affect the ratings, but I liked that Dean went for it and didn’t mess around. It was never really too out there – there was no blood ties, the sex was consensual, but you need to wrap your mind around that concept first. I think a lot of people will be stuck on the step-siblings bit.

The Undoing is a psychological story – don’t expect action, or crazy horror, or something like that. This book is about three friends, their ties, their history, their story, and it is worth every second of your time. The way the book is structured is great, too, where it starts at the end result, after the tragedies, and works its way back. This works wonders for the book because you get the story as it is, and you go back and see how the relationship between Rory, Eric, and Celia came to be, how it had changed over the years, how they all felt about each other. It is incredibly complex, and I felt for these people. They did not have a simple childhood, they were too close and too wound up with one another, I can see how their relationship would progress the way that it did.

The writing made the characters real for me. I ached for them, for their struggle, for how complicated things were for them, it was insane. Because they were all fleshed out so well and had depth, it was easy to get so involved. This is not to say that they were all likable, all the time, because goodness knows they had their moments, but that also made them more realistic people for me. How many people are truly perfect? I found that, at times, the sex would seem like too much, but then, each scene served a purpose.

The side characters, too, brought something to the story. So cold, so calculated. The novel is haunting, demanding your attention and lingering long after the fact. I was enthralled, the book really feels immensely personal. Initially they are just characters, dead people, and when you start uncovering their ties, you are a little confused because, well, Celia and Rory are step-siblings, and Eric is Rory’s best friend, yet Celia is sleeping with them both? So… first they were dead, then she was sleeping with them, then you find out they are all aware of each other and the sexual ties, and have some crazy connection? It starts confusing, no real attachment to anybody or investment in the outcome, how we got there, just a bit of what the hell thrown in, and then it grows into this immensely complex, crushing, beautiful, dark story. The three of them are so wrapped up in each other and their history together that they cocoon themselves away from the rest of the world – nobody else really gets in, and it isn’t healthy.

Small things stuck with me after – the significance of Eric’s tattoos, the friendship between Rory and Eric, how it changed, Celia’s disconnect from the world, her contentment to stay exactly where she was. I don’t want to say too much, but there are little things that are thrown in that resonate. The Undoing is a deeply moving novel – for me, at any rate. I can see that I will go back to read this time and time again because there is so much to it, so much intensity, so much beauty and confusion, obsession and longing, and it all comes together so wonderfully. It is sad, muddled and tangled, but worth every moment. I don’t know – this was totally my type of read: unconventional, twisted, not something that everyone will like, and not afraid to explore some taboo subjects. 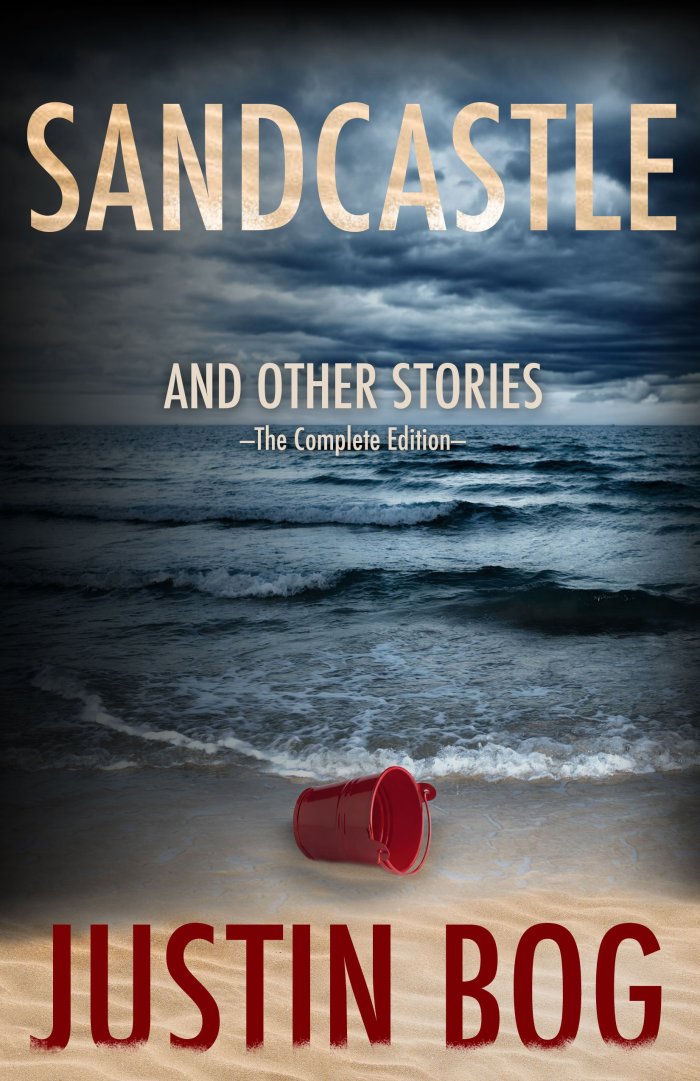 SYNOPSIS: These twelve literary, psychological, and suspense tales are nothing short of an adventure through a roiling sea of emotion. Meet: an old man twisted by fate and a lost love . . . a young girl playing on the ocean shore who becomes entangled in nets of a mercurial god . . . a divorced man mired in troubles who’s coerced into taking a singles cruise . . . a Hollywood actor in a television drama who’s always typecast as the bad boy . . . a child kept awake by night terrors, and a woman who hides her secretive personality from everyone on the beach one sunny day. Genuine voices of the characters, mixed with a clear-eyed tonal directness, make this a series with mesmerizing psychological interaction. Stories span a broad depth of human understanding and build a bridge between deepest chasms of pain and high portals of joy. Read these dark tales and stand witness to unspeakable hate sitting with cozy wile, right beside unconditional love — a provocative and compelling mirror on the human condition. – via Goodreads

I was pleasantly surprised by this. I picked it up, was interested to see the short stories that featured, and there were some solid reviews about it. I had no real idea what to expect from the author, who is someone I had not heard of before, or his style of writing or the type of content. Something I am going to draw attention to from the off is the fact that Justin Bog can write. I mean it, really well. It flows quite well, each story brought something different to the table, even though a lot of them had repeating themes (such as oceans, twins, waves, paranoia, trees, psychological issues, names, etc). Bog’s writing style is engaging and creepy, and all his stories featured here are quite unsettling and psychologically creepy, crawling in under your skin. This might not appeal to the average reader, or someone who does not like some twisted tales, and it will upset those thinking they are getting a light, happy-go-lucky read. However, it totally ticked all my boxes for a short story. Doesn’t give away too much, but just enough to make you think, to wonder, and the way that Bog concludes the stories is also quite good, leaving a world of possibilities open to explore. Sandcastle and Other Stories is a really fast read, so it won’t demand an overkill of your time, and offers a great alternative to the average lot of short stories, something I am not usually a fan of. I looked forward to every story, and even when my mind went wandering, it never strayed too far, and always whipped back to the moment. Each story contains a darkness that is executed very well, and some of these stories linger long after you have  moved on. I am so glad that I took a chance on this, as I am certainly looking forward to reading more of Bog’s work, I would love to see how a full fledged novel from him would play out. If you are into short stories, or would like something that is quick but different, I would highly recommend Sandcastle and Other Stories.