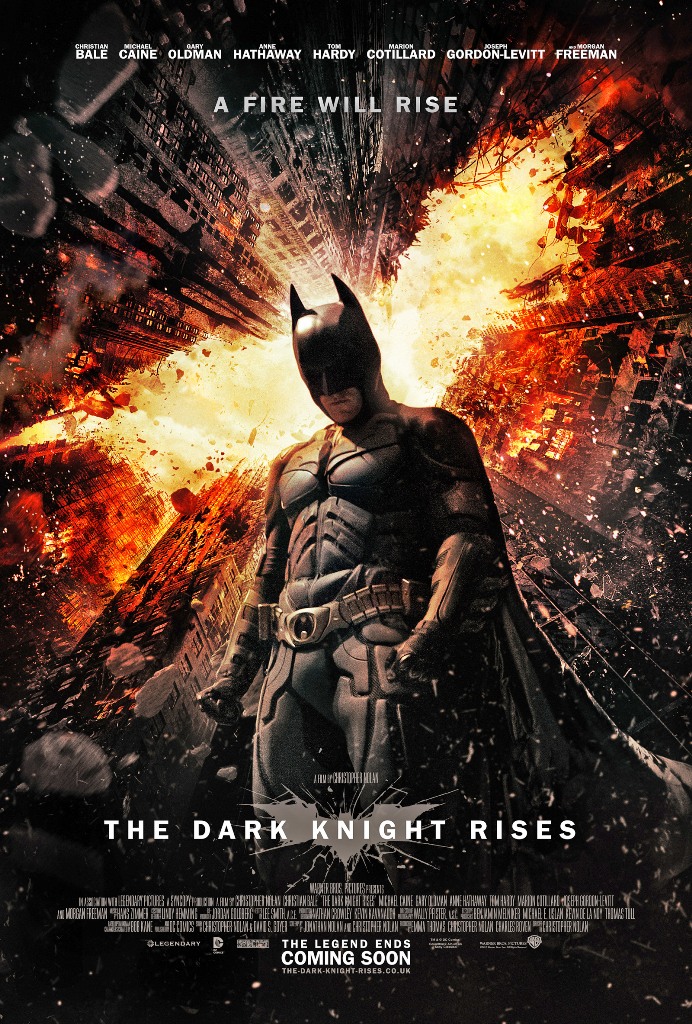 “Oh, you think darkness is your ally. But you merely adopted the dark; I was born in it, moulded by it. I didn’t see the light until I was already a man; by then it was nothing to me but blinding!”
– Bane

This was a brilliant way to conclude a brilliant trilogy! I know that Luke and I don’t necessarily see completely eye to eye on this one, but I still think it is really good. At least we can agree that this trilogy is a stroke of utter genius. Plus, Tom Hardy as Bane. I mean come on, like that wasn’t going to go down phenomenally. Tom Hardy was just an amazing Bane, and his role was simply flawless. Nolan again nailed that perfect mix in the villain, where you wanted to know more about him and see what he was going to do, but still held out that Batman would save the day. Christian Bale is, again, just the most perfect Bruce Wayne/Batman. Seriously. The way he embodies both the billionaire playboy and the Dark Knight? It’s awesome. However, as much as this movie got right, I am not going to pretend there weren’t flaws. The pacing was a little uneven, and there was some incredibly flawed logic thrown in here. For instance, I get that John Blake is intuitive and all, but just guessing Batman’s identity right off the bat was just too much for me, and there is also the issue with Bane knowing exactly where Applied Sciences was, though it is apparently “not on the books” anywhere, and not public knowledge. Also, I am not a fan of Anne Hathaway, and her Catwoman/Selina Kyle is someone that grows on you after multiple viewings, but is still not a character I enjoy a lot at all. Yeah, there were a few niggles, but so what? This movie is ridiculously quotable. My fiancé just doesn’t even know what to do with me… walking up staircases and he doesn’t turn on lights? “Ah, you think darkness is your ally.” Threatening someone? No sweat! “It would be extremely painful… for you.” My one colleague and I communicate a lot in Bane quotes (well, any movie quotes). It’s a problem, we know, yet we have absolutely no plans to change that. But truly now, Bane is awesome on so many levels (and so hot here – the ladies will understand this, though it was unexpected)! And there are so many quotes in this movie that beg to be used. One of my favourite things in this movie was the return of the Scarecrow. I adore Cillian Murphy and I am a big fan of his Dr Jonathan Crane/Scarecrow. I was thrilled to see him given more screentime this time around as opposed to The Dark Knight. Anyway, The Dark Knight Rises is another solid outing from Nolan, is really fun even though it is flawed, and closes one of the greatest trilogies of all time off properly. Go watch these all again immediately. Go on.

PS: I just remembered now – this movie was totally worth every second of my two week self-enforced internet ban prior to its release (I hate getting things late in SA)! It still remains a running joke, and Natasha still can’t believe I underwent something like that for a movie.