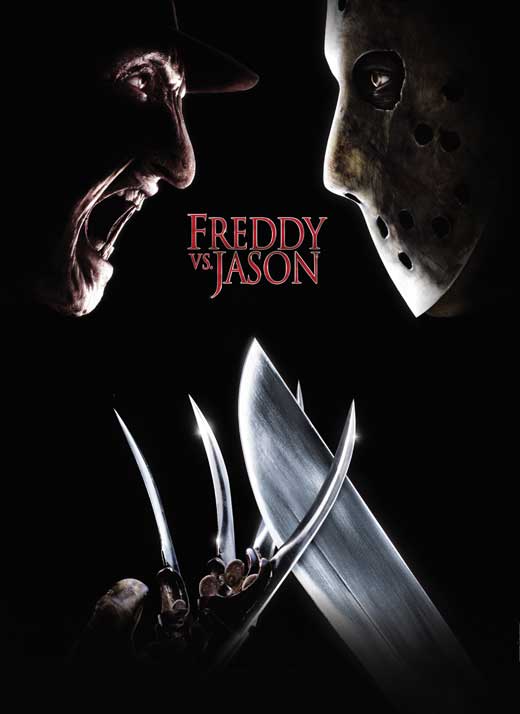 “I’m dying to see what skeletons are hidden in your closet.”
– Freddy Krueger

Oh yeah, you saw that right. I am all over this again, relentlessly. I think it is safe to say we all know I  have a minor Freddy obsession, but this concept was absolutely brilliant for me. Freddy Krueger in a major show down with Jason Voorhees? No ways, get out! But yes, that is exactly what it is! So who in their right minds would avoid it?

Freddy Krueger (Robert Englund) cannot prowl Elm Street in Springwood anymore. It seems that the residents finally wised up, and although it was a little unethical, I can completely comprehend why they did what they did. All the children that ever knew Freddy have been sent to Westin Hills, a psychiatric institution, and treated intensely for their dreams. The rest of the town does not even acknowledge his existence, and have erased anything that could link anyone to the history of Freddy. If no one fears him, he cannot do his dirty work, can he?

Freddy misses stalking his Elm Street prey, and is desperate to get a foot in the door again. He devises an almost ingenious plan: awaken Jason Voorhees (Ken Kirzinger) and send him to Springwood. Instilling that fear will give him power again, and with the fear he can roam freely again. Naturally everyone would think it is him, right? Kitted out as Mrs Pamela Voorhees (Paula Shaw), Freddy comes back and coaxes Jason to rise again and hunt in Springwood.

In Springwood, Lori Campbell (Monica Keena) lives on 1428 Elm Street. This makes her the unfortunate yet logical choice of where the brutality will begin. Her friends Kia Waterson (Kelly Rowland) and Gibb (Katherine Isabelle) are staying over, and try to get her to hook up with another guy in hopes that she will finally let go of her ex, Will Rollins (Jason Ritter), who abandoned her and has never made the effort to contact her. Lori is unable to move on, though. Gibb’s boyfriend and friend visit, and her boyfriend gets butchered by Jason. The teenagers runs screaming for help, and run into the all helpful Deputy Scott Stubbs (Lochlyn Munro).

While at the police station, Lori hears hushed chatter about Freddy Krueger, and has no idea who and what he is. The cops are desperately trying to keep it all under wraps, fearing that as soon as people know that someone was slaughtered in the Elm Street house, panic would spread like wildfire. Lori is not prepared to let it go. Neither is the newcomer to town, Deputy Stubbs. He begins his own informal and independent investigation into the machete man who ripped up a party and the history of the Elm Street house.

Will, in the psychiatric hospital, sees that there was a brutal murder in the Elm Street house, and his friend, Mark Davis (Brendan Fletcher), escape to go and see if Lori is alright. The couple reunites, but Mark has made the mistake of spreading the Krueger fear, and in so is giving Freddy more strength. 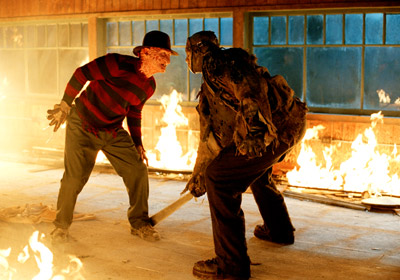 Freddy makes the startling discovery that he has no control over Jason. He brought him back for a purpose, and once it is reached, he has no way to keep Jason in check. Slaughtering the kids and hunting Jason seem to take up equal parts of Freddy’s energy, but the more a pain in the ass that Jason becomes, the more his concentration shifts to eliminating the thorn in his side.

The kids all notice that Freddy is shifting his attention to Jason, and decide to exploit it to the max. Hauling an unconscious Jason Voorhees into their Scooby Van, they set off toward Crystal Lake. Their plan is to put Lori under, and bring Freddy back out of the dream with her, and then leave Jason and Freddy to take care of each other, but wish to shift the odds into Jason’s favour by having him on his home turf. The plan has flaws, but unfortunately it is the only plan that they have. The showdown between Freddy and Jason is awesome, with ridiculous dialogue, but solid effects.

Freddy vs. Jason earns a solid 6.5/10 for me. I was overly entertained by the slashing and the rivalry, the cinematography was great and again, the cheese. I loved it, and I know a lot of people bashed the film, but I thought it was a great integration of the two horror cults. Freddy again coins the term “bitch” more times than you can shake a stick at, but I kept on adding “bitch” in mentally when he was talking to Jason. So weird to hear him argue minus the expletive. I will most definitely review this film in more depth when I do a re-run of the Friday the 13th collection. I particularly enjoyed it right at the start when the New Line Cinema logo rolled onto the screen, and there was the perfect production of the Nightmare On Elm Street and Friday the 13th theme songs fusing together. Yep, the inner geek made a small appearance! I thought the way the two stories were merged was great, typical slasher flick, lots of blood, guts, gore and crappy dialogue, and enough cheese to last a lifetime. It is one of those concepts that can either work well for you or go up in flames. I will always appreciate the consistency of Robert Englund returning as the horror master, as well as the fact that they corrected the Freddy costume again after the debacle of the last one, but I see it is not him that returns in the 2010 film. Major damper for me there. I don’t even know if I can bring myself to watch it. Definitely worth the watch, however, it was great fun.