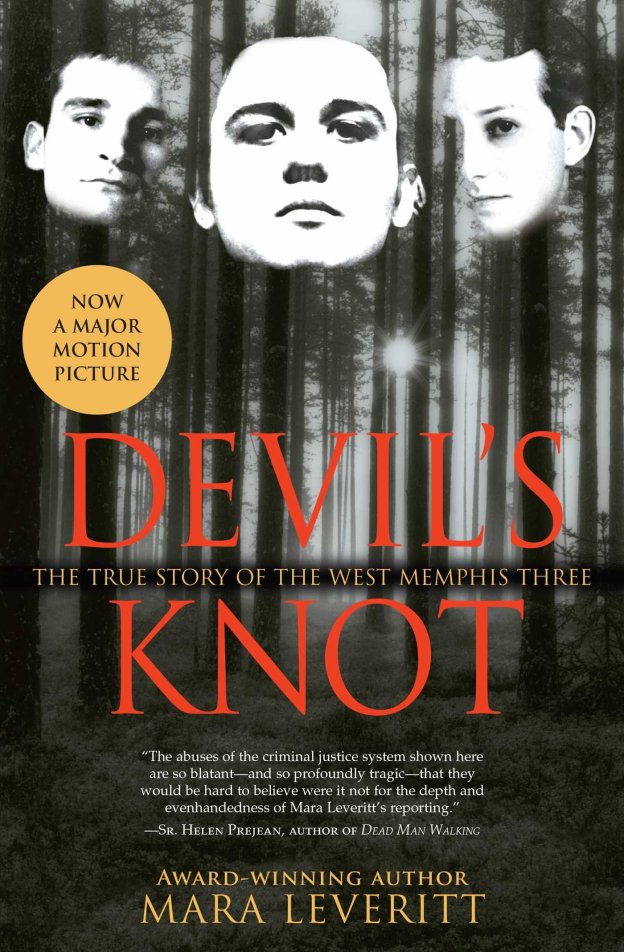 SYNOPSIS: In 2011, one of the greatest miscarriages of justice in American legal history was set right when Damien Echols, Jason Baldwin, and Jessie Misskelley were released after eighteen years in prison. Award-winning journalist Mara Leveritt’s The Devil’s Knot remains the most comprehensive, insightful reporting ever done on the investigation, trials, and convictions of three teenage boys who became known as the West Memphis Three.

For weeks in 1993, after the murders of three eight-year-old boys, police in West Memphis, Arkansas seemed stymied. Then suddenly, detectives charged three teenagers, alleged members of a satanic cult, with the killings. Despite the witch-hunt atmosphere of the trials, and a case which included stunning investigative blunders, a confession riddled with errors, and an absence of physical evidence linking any of the accused to the crime, the teenagers were convicted. Jurors sentenced Jason Baldwin and Jessie Misskelley to life in prison and Damien Echols, the accused ringleader, to death. The guilty verdicts were popular in their home state, even upheld on appeal, and all three remained in prison until their unprecedented release in August 2011.

With close-up views of its key participants, this award-winning account unravels the many tangled knots of this endlessly shocking case, one which will shape the American legal landscape for years to come. – via Goodreads

You know, I heard about this clusterfuck when I was much younger and watched Paradise Lost. I was horrified. Me, my husband, my circle of friends? We were (and still are) those “weird” kids, those “Satanists” with our black shirts, our band shirts, our black trench coats, spiked wristbands and belts, outspoken questioning of religion, dark hair, dark makeup, black nails, the whole shebang. Back then, and even now, if you had to look at my reading habits, movies/series collection and Google search history in a witch hunt style and with and closed mind, I would probably also have been tossed in prison and the key thrown away. Appearances can be deceiving.

I know that there is a vehement back and forth about whether Echols, Baldwin, and Misskelley are innocent or not. This book is a great read to get you up to speed with the finer nuances of the case, investigation, and trial. Yes, Leveritt tried and for the most part succeeded in being as impartial as possible concerning the West Memphis Three, and the book never came across as repetitive. The book read very easily and was a thorough affair. The notes substantiated the content, and the content is written in a way that it is not bogged down by inner monologue and personal opinions, and so presents the horror that was visited on those three poor victims, as well as that botched investigation and joke of a trial. It is presented in a clear, concise way and is structured in a way that is understandable and easy to get into. It is presented that the information never bogs you down, and makes logical sense.

I was hooked on this book, and I highly recommend it for a read. It is not boring, and doesn’t read too heavily, either, making it daunting. It just barrels along and isn’t repetitive at all in giving forth the information, and you don’t feel Leveritt is forcing an opinion on you, just informing. The lunacy of the situation had me gasping and in shock on multiple occasions. Super solid true crime read.