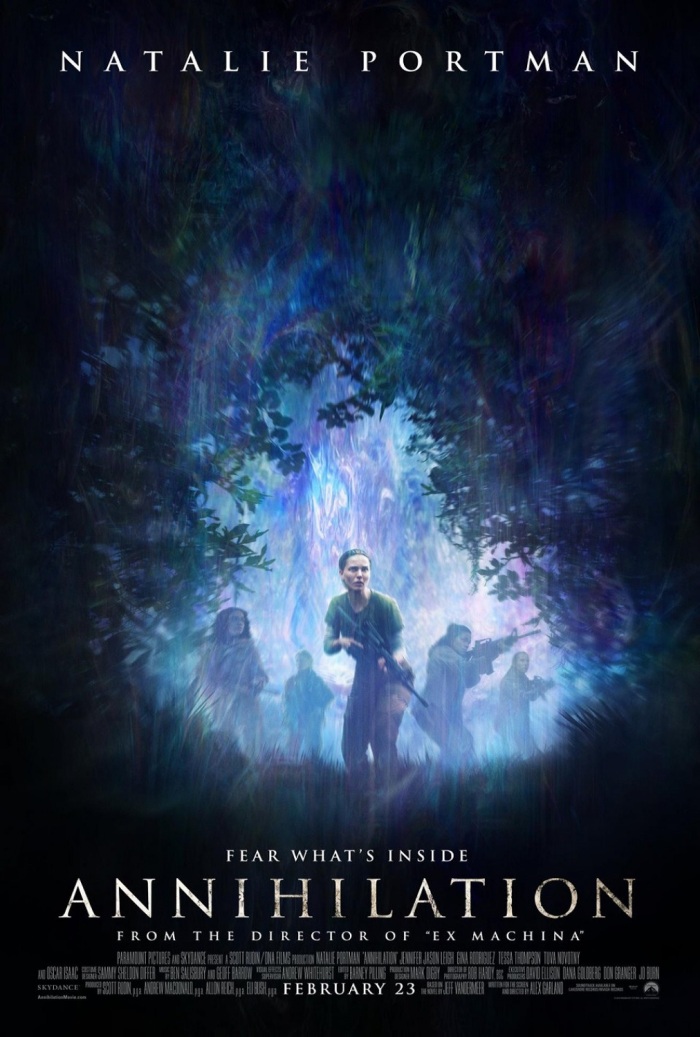 SYNOPSIS: A biologist signs up for a dangerous, secret expedition into a mysterious zone where the laws of nature don’t apply. – via IMDB

Alright, so this movie seems to have a lot of people either super loving it, or totally hating it. I guess when I think back on it I can totally understand how one could end up in either camp, if I am being honest. There is a lot to like about Annihilation, but there is also a lot that is going to be annoying and can’t be overlooked.

I liked it quite a bit. It was ambiguous, but not in that unsatisfying way that It Comes At Night was. It raised a lot of questions and answered very few, and the few answers it did answer, I could have done without, and some that I wanted, I went without. Visually Annihilation is a beautiful film, and that cannot be denied. Strange shimmer, exotic everything going on behind the shimmer, this new world, all of it, and it works really well.

Then there is the cast. I think this is where the movie got hurt a bit. The characters are all really flat and lifeless, after all is said and done. Jennifer Jason Leigh is just angry and resentful and there. I could have done with more Oscar Isaac, too. Tessa Thompson and Natalie Portman are the only two that will remotely stay with you. The logic is also a little bizarre – for years soldiers have been going in and nobody has been coming back. Let’s send a group of all-female scientists. Like, I got the sending scientists in and all that, but… the definition of insanity? Nothing is changing, evidently. With this there were inconsistencies (lost time only happening and addressed once the whole time??).

There were moments of delicious creepiness (you all know what I am talking about), and the explanation took away some of that beautiful horror shine for both my husband and myself, but the conclusion for this makes up for some of the weaker parts, all while leaving us with another ton of questions, which I liked. I definitely think that this movie is worth a rewatch to pick up on more things.

I think that Annihilation is ambitious and visually stunning, with decent performances of flat characters, and has a score that works really well. I don’t necessarily need a movie spoon fed to me, but Annihilation took it’s ambiguity throughout a little too seriously, leaving a slightly unsatisfied feeling towards the end, though the ambiguity of that is not what left me unsatisfied. Yes, I know that all sounds crazy. Worth a watch, and a rewatch for sure. Not Ex-Machina, but not terrible, either. I look forward to more of Garland’s work.

I went into this blind. I read a lot of good reviews on it, but didn’t read too in depth or anything. Don’t even watch the trailer, just go watch the movie.