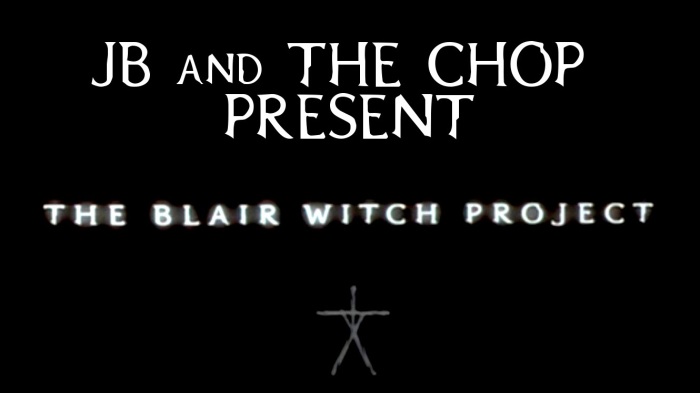 When the trailer for this movie first came out, I believe it was called “The Woods”,  made by the team that did “You’re Next” and “The Guest”, this looked nut-busting awesome and seemed like it would be a big winner. Then they called it Blair Witch and it went straight to streaming so…. hmmmm….. did anyone’s nuts bust here??? 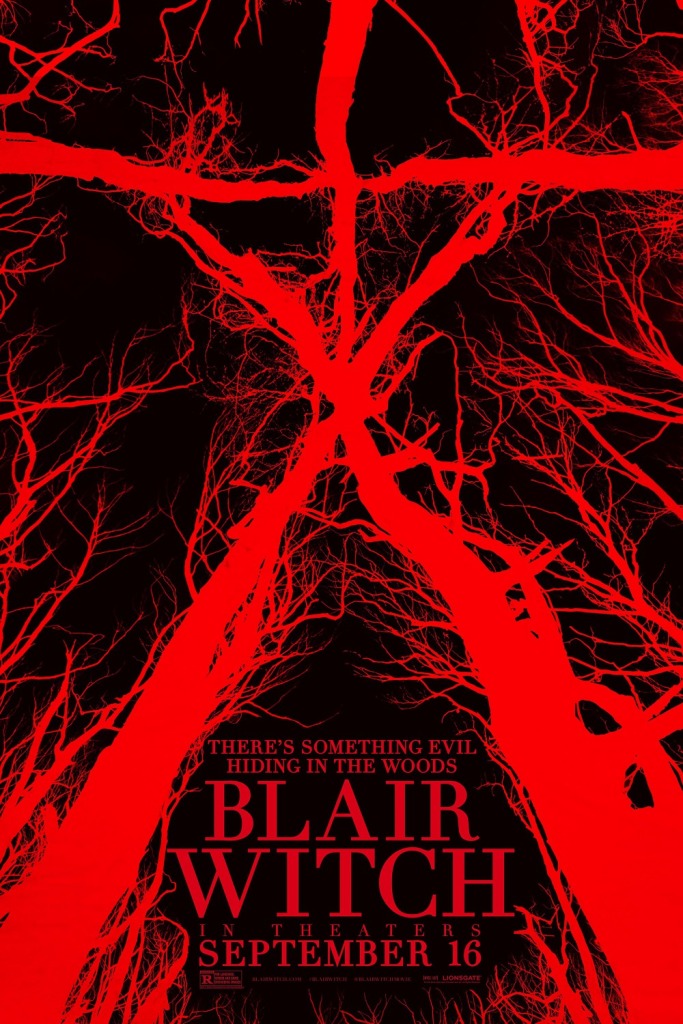 SYNOPSIS: After discovering a video showing what he believes to be his vanished sister Heather, James and a group of friends head to the forest believed to be inhabited by the Blair Witch. – via IMDB 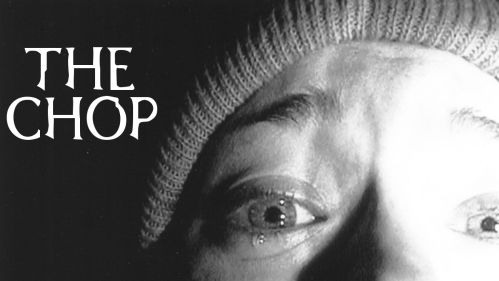 The answer to that is a big, blue balls no for this wretched movie. What the FUCK? This was totally stupid from start to finish, I don’t know about JB but I wanted to kill all of the characters as well as the writer and director, and then they threw in of the worst fucking CGI creatures I’ve ever seen. Fuck you, man! 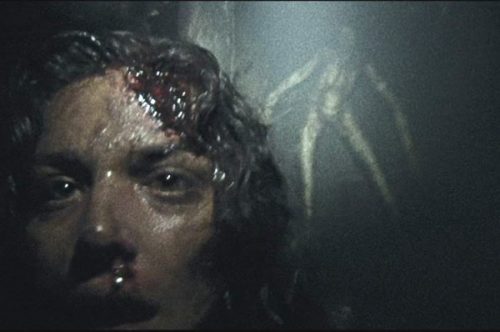 Who could have possibly thought that was a good move? Also – I think there was something going on with a spaceship. Or something. And some time travel. I think. I couldn’t have cared less. 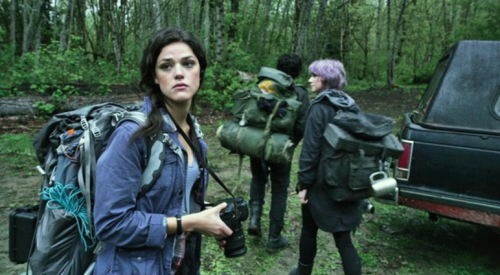 You know the routine. A bunch of dopes go into the woods. They hear a bunch of shit noises. They go into an old house. They eat shit and die. Fucking suck it! I mean, I can’t even think of things to write… here’s that one pic again: 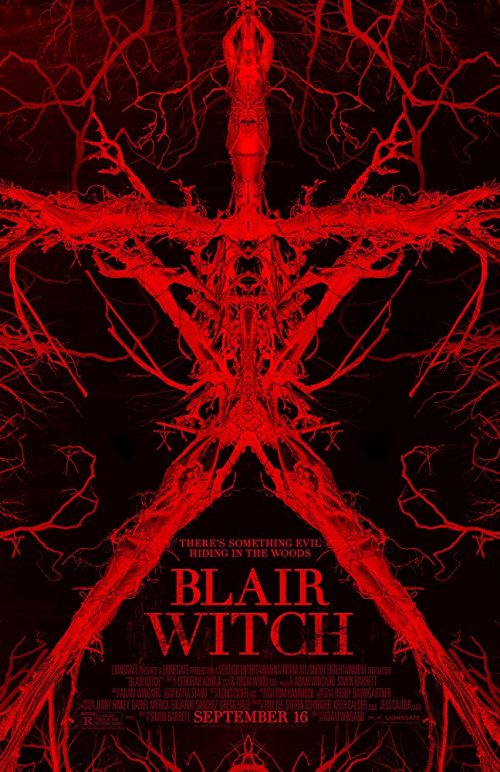 I don’t know what to tell you but this movie is horseshit. I want to give another dearest thanks to The JB. Despite everything we’ve been through she’s still hanging in there with me. Surely things will get better for us, right??? Now – the real question is asked – are JB and I aliens from a distant time? Are we visiting from the past…. or the future? 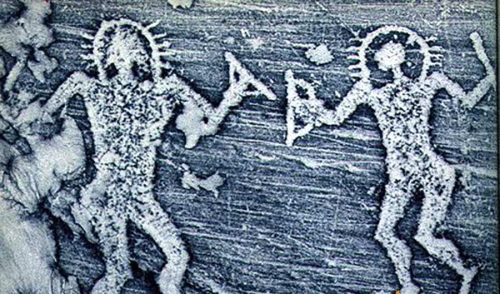 Or is this an example of The Mandela Effect and you don’t remember things the way they happened………………………… ?? 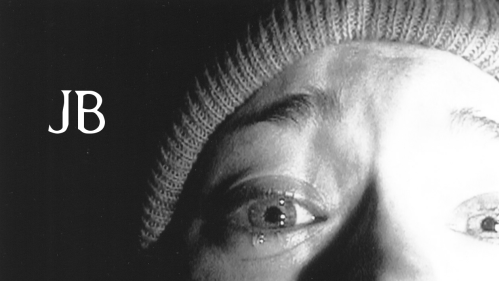 You know, I mistakenly thought that things couldn’t go further downhill with these movies than that Book of Shadows crap. I was sooooo wrong.

So, Wingard is a director that a lot of people fawn about. For me, outside of The Guest (of which I still have an indecent obsession), I am not totally in love. Him and Barrett aren’t bad, they are a little different, and I like that, but I don’t think they are like the Second Coming or anything. So I didn’t expect to hate this (shit, I even liked Death Note, though I will likely be butchered for even saying that), but I did. There. I said it.

Blair Witch is so fucking messy and upside down and stupid and cringy and NO. So much no. Initially I was really interested in the concept of Heather’s brother still wanting to know what happened to her all those years ago, and wanted to see what would happen. Instead we have icky dialogue, the characters I cared least about in the whole series, and then… the Witch/Spindly-Legged-Spider-Alien. Like… guys? Help?

There were a ton of throwbacks to the first movie littered throughout this one, and for the most part, those sections were handled rather well, which is odd considering how useless the rest of the movie was. And I am all for making a project yours, but this just… didn’t really fall in line as well as you would have hoped. We had alien witch things and outside light ups and arms in trees slapping people around, Prohibition tunnels, tents getting ripped up, and people being snapped like twigs. Uhm… sure.

So all of that makes it sound like a lot of crazy stuff was going on and that it was at least worth a watch, right? Wrong. If you take everything together and put it there, it looks like there was quite a bit to watch. In reality, there was a lot of bitching and moaning, crappy camera work, bland friendships, flat, generic characters and a whole lot of meh-ness all round. Seriously, I thought this would have been a little better. There are reviews I have read online that called this movie smart (!!!!!) and deft (!!!!!) and scary (!!!!!) and I am just wondering if we all even watched the same fucking movie. Because this movie is lame and heavy handed and soooooo drawn out and boring.

Needless to say peeps, I think the only movie you need to see in this series (if you haven’t seen any and if you want to see what it is all about) is The Blair Witch Project, even though it is screechy and low budget, it also comes across as the most sincere, and it was the movie that popularised the stupid found footage genre.

Thanks to everyone who stuck with us for yet another series and read, commented, and enjoyed our torture! We survived this franchise, too! The things we put ourselves through for fun and entertainment. But you know what? We love it. And PSC, you are the bomb! I totally love working with you on all our projects, and I am so happy you were up for these, even if they were sketchy.