Peeps! It’s us! Again! So, following last week’s exploration of the movie that really gave rise to the crap that is found footage horror, we are going to explore the inevitable sequel this week. Well, how bad can it really be, right? Right? Hello? Anyone? Shit.

SYNOPSIS: A group of tourists arrive in Burkittsville, Maryland after seeing The Blair Witch Project (1999) to explore the mythology and phenomenon, only to come face to face with their own neuroses and possibly the witch herself. – via IMDB

Okay, so, hot on the heels of the unexpected (I am sure) success of The Blair Witch Project comes a *gasp* sequel. Seeing as the first one was not brilliant, but cost very little to make and gained crazy popularity, I suppose a sequel was not surprising. Also, it being shitty could also not have come as a shock. Okay, okay, that is a bit harsh. It is shitty, no doubt, but it could have been so much more offensive than it really was at the end of the day.

Upfront and honest in these reviews, right? Well, the best thing about this movie, without a doubt, was Marilyn Manson’s Disposable Teens and later on Rob Zombie’s Dragula. For reals, at least there was something good to listen to. The soundtrack overall is probably not too bad and the least offensive thing about this movie.

On to the actual movie. The performances! Dear lord, the performances! They were a particlar brand of wtf, not to mention the character logic. It astounded me immensely, and was beyond questionable, even for a horror movie. For example, if I miscarried, the last thing I would do would be to go stay at a stranger’s house. I would want my husband and home, comforts and all that. Not some random dumpy place in the bush and strangers. This is just one of the things that I was like erm… okay.

Our main peanut that we watch, good old Jeffery, is mad as a hatter. Like seriously, this guy has some issues, and we never get to see more about his cuckoo past, which is a disappointment. Actually, scratch that, is probably isn’t a disappointment, because I am sure they would have cocked that up to. Let’s not forget the sheriff. That character writing was hilarious. His phone call to Jeffrey and waving on TV? That was actual comedy gold, because… why?!

We have Wiccans and goths and “writers” out here, but it is all just… nope. It’s like every character in here was written purely from stereotypical conventions. Look, I get it was a budget movie and it was just a money grab and all of that, but have some self respect! Now, I must say, while it is bad, it certainly isn’t the worst movie I have watched. Let’s not forget that Eric and I continue to slog through the Amityville movies (I swear, there is no end in sight). If you don’t overthink this, it is just a sad, generic movie, but nowhere near as offensive as some. It is typical shitty sequel pulp. It could have been more, and Berlinger tried to make his own movie, using the concept of the Blair Witch and doing his own thing. Seriously, the opening for this movie made me think there was going to be more to it. I really liked it,  but it didn’t quite stick to that.

Oh, oh! Oh! How could I forget?! There was one true gem in this movie, which was the skit about how many Heather’s you would need to change a light bulb. Like I laughed, because it was so cheesy yet so totally fitting hahaha. Well played. I did like how the movie skipped between found footage and actual movie, so that it wasn’t all this disjointed shaky cam crap, but that does not save this or make it better. It was a concept that could have worked but instead it was just another scoop of awful to this… movie.

I think it is bad to watch this because yes, I am bitching about it being bad, and it is, but it is so offensive because it actually could have been something more. I see that there was a lot of studio meddling (surprise surprise) and I actually really liked the vision that Berlinger had and wanted to bring forward, because that would have actually made for a solid psychological thriller, and instead we got a shitty movie. There are moments where you can see what he wanted to do, and it is good. Like cut out all the random flash forward and back crap, and you can see the skeleton of what could have been. Oh well.

Okay, but forgetting the corny joke and the Manson and Zombie, Book of Shawdows is a typically messy, cheap cash grab, a practise which is yet to die out. Not the worst of the worst, but by no means a movie that you need to seek out. I think it might get a little more hate than necessary, too. It is not worth the eternal scorn I keep reading about. Seriously, guys, I know The Blair Witch was a big step for horror history, but it is not an amazing movie, either, so whoosa!

The year is 2000; we have all survived the media invented Y2K scare,  JB is like…. 8, we have AOL browsers, we have pay-porn on the computer, we’re all dying for something like MySpace or our own webpage, I’m still trying to rock a head full of long hair (think = fail) and they unleash this thing to a series of vile and cruel reviews by the newspaper and TV critics. IMDB has just started! Memories of whatsherface with snot coming out of her nose linger. I skip this because I don’t care and go on to other things. Life happens and I buy a house. My friend gets shot in the chest but survives and moves home and we watch horror movies. Eventually this shows up on some cable channel, we watch it – fully sober (kidding) – and I say – “Well that wasn’t too bad….”

The year is 2017; even though my web presence is basically dormant, JB still keeps in touch. Now facing the nature of snow and ice after she moved, we discuss cold weather. We decide to report on three more movie franchises – say whaaaaaaaaaaaaaaaaaaaaaaaaaaaaaaaat!! This one is agreed upon first and the first movie sucks complete balls. See last week’s entry. I start watching this on HBO one day and it sucks so bad I can’t concentrate. Jeffrey Donovan is absolutely miserable (Note: I loved him in Fargo Season 2), I thought I liked Kim Director but she sucks here, the non-HD shaky cam is gross, there are enormous problems with the story and the sometimes-useful use of time trickery in film just doesn’t work.  This is not Memento.

I understand cash-grabs. I understand milking things for all that they’re worth. But, like my good friend once said, “if you put lipstick on a pig, it’s still a fucking pig.” This movie is the epitome of a pig with lipstick on. Here’s my spoiler summary: SUCK. This thing is both of those pictures of Donovan above…. red eyed and tired and then foaming at the mouth shitty.

I do agree with JB that there is a good story in there – but everything about this was bullshit. The acting, the dialogue, the script, the “Oh-shit-I’m-covered-in-scratches!-Me-too!” stupidness, that who-the-fuck-cast-that-guy-with-the-ponytail sheriff, the pitiful non HD footage (who can watch that on a 70 inch tv??), Donovan’s butt… nothing really worked for me here….

Because we do what we do and we do what we must and we do what we like and we like what we do, I have to be honest. I didn’t finish this fucker the second time around. By the time we got around to scheduling and writing about these things, this was no longer out on HBO and I was going to be damned if I rented this. I remember how it ended and I didn’t need a second go. So – am I being fair? I just typed the word ‘fart’… coincidence??  That sounds about right – this movie is a big fart, and not the good kind where you accidentally poot and sit down in it and it’s…. OK… this is a dog-fart-room-clearer…

I don’t really have anything else clever to say about this, not that I’m clever. I didn’t like much about it. I guess it wasn’t vile and wretched but I couldn’t get into it enough to finish it off a second time. To close out – here’s a butt for you. Enjoy! #butts 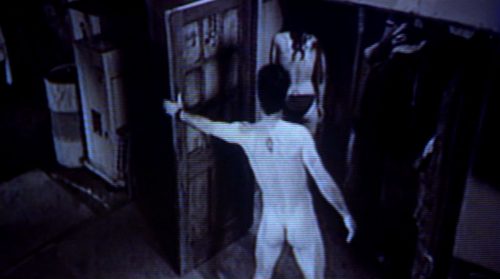