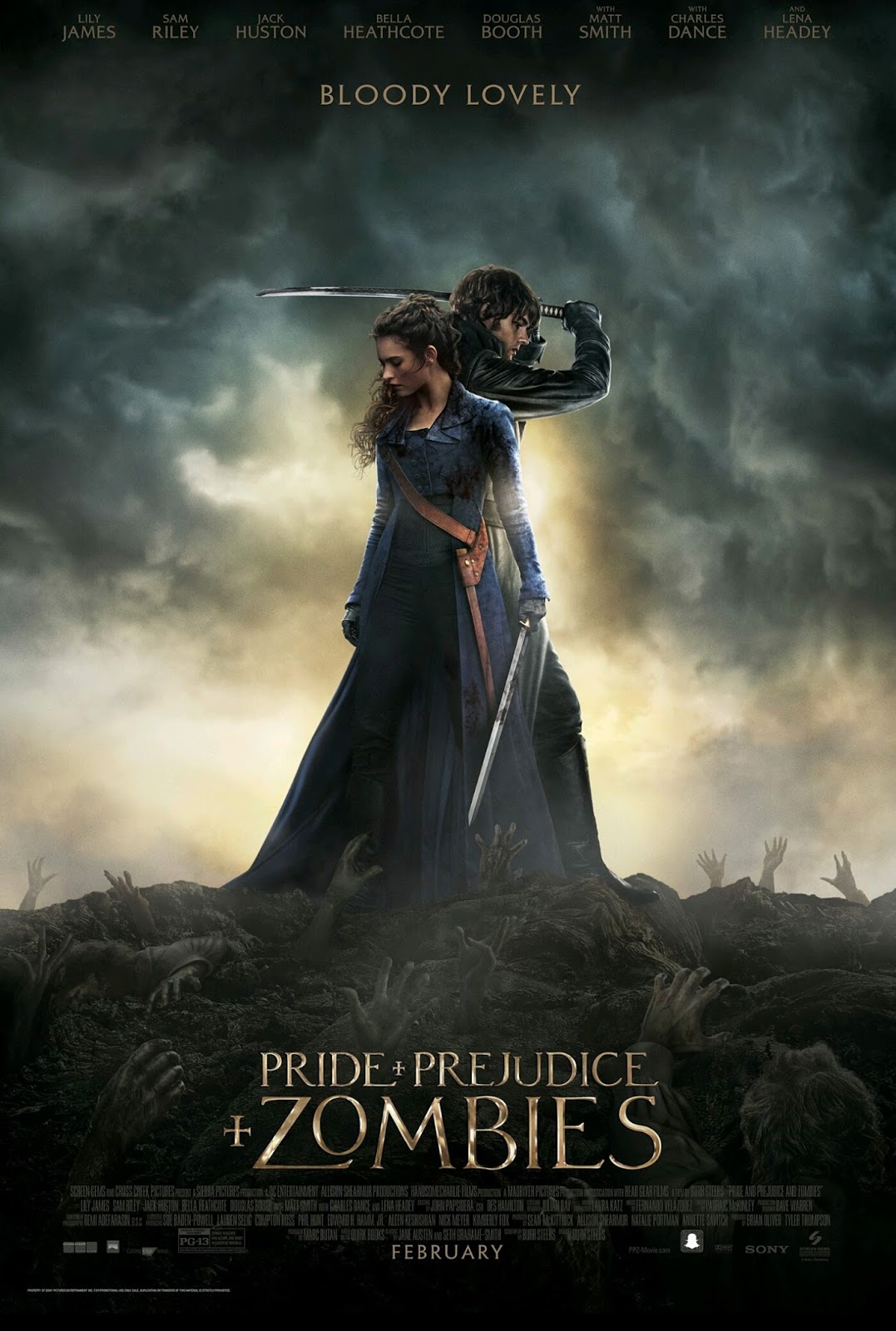 “My daughters are trained for battle, sir, not the kitchen.”
– Mr Bennet

SYNOPSIS: Five sisters in 19th century England must cope with the pressures to marry while protecting themselves from a growing population of zombies. – via IMDB

Guys. Guys. Let’s just talk about this. I cannot believe that I had so much fun with this movie. I mean seriously. Take a classic and add a ton of zombies to it? Not traditional zombies either, mind. How exactly was that supposed to work out? Super fun, let me tell you that! I am so pleased that Natasha enjoyed this so much and made me watch it, as I had zero designs on checking this out before she insisted. Now I have seen it a few times and still think it is so much fun. Pride and Prejudice and Zombies totally embraces all that is ludicrous about it, and delivers on so many fronts. Like Warm Bodies, this is a movie that has no right to be as good as it is, and yet here we are.

Right off the bat, I must say that I enjoyed the cast. I think everyone was well cast and they all seemed to have a total ball. Sam Riley is an actor I quite enjoy, and do wish he was in more things. He’s an absolutely brilliant Darcy, and there is just no way that you are not in love with the dude when all is said and done. For reals. Riley just sneaks up on you – he delivers a harsh Darcy, a man so reserved and focused, and before you know it, you are like oooooooh… totally get why Elizabeth would fall for him. Then there is Lily James, and she is a wonderful Elizabeth Bennet. Got mad love for this character – ballsy, educated, can take care of herself and is strong? So ahead of her time and a great feminist? Hells yeah. I was rooting for her all the way. I absolutely loved watching her and Riley together, they had lovely chemistry – so contained and yet completely through the roof. Jack Huston is another actor I particularly enjoy, and I so wanted to trust Mr Wickham, but he is a smarmy bastard. Pretty one, but still.

I would like to take a moment to talk about Mr Collins and Matt Smith’s portrayal. It is evident he is having a blast portraying such a total twat, and is beyond exasperating. My inner feminist was just like “wtf” the whole time, and yet his character made me laugh and groan, and that is purely down to how well Smith played Collins. Charles Dance was also great as Mr Bennet, and I had a lot of respect for how he saw his girls as more that just marriage conduits. Well played, sir!

Pride and Prejudice and Zombies totally embraced its weirdness. Right off the bat it has a crazy opening (that elaborate story and animation was really cool), girls with all sorts of weapons in all sorts of places and mad training and a mother who just wants them to marry rich. It’s insane. While being totally out there yet still loyal to the source material, this movie looks good, too. The sets and costumes are really good, and it does not come off as a budget film. It goes all out, and it really helps the cause.

As you can tell, I thought the movie was a lot of fun. Don’t go into this and expect to see the classic as you have come to expect. Why can’t people just accept this as a fun adaptation, not something competing with a classic? Don’t take it too seriously. For reals, it will ruin the experience. It is silly popcorn entertainment that is actually put together quite well, and has a cast that just makes it well worth the watch. It’s funny, it’s ridiculous, it has zombies and manages to convey a classic love story, where you get involved and want to root for Darcy and Elizabeth to just, you know, find each other. So I think in terms of that the movie delivered, and I would say watch it if you are not going to nitpick for issues and can just shut your brain down at the door and have some fun.