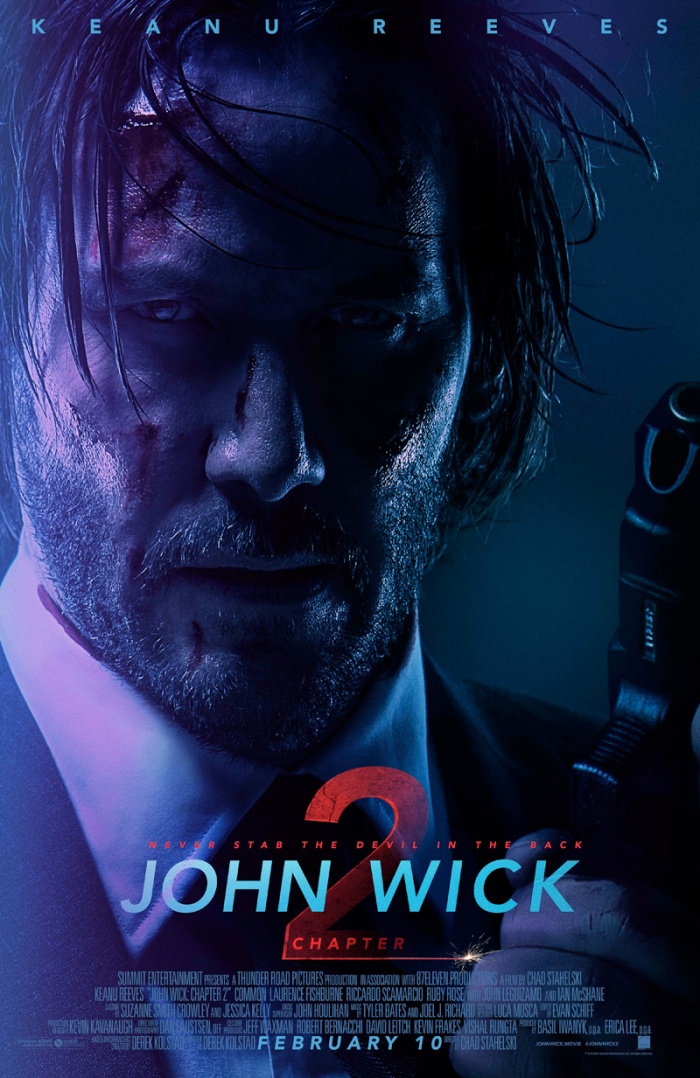 “You stabbed the devil in the back. To him this isn’t vengeance, this is justice.”
– Winston

SYNOPSIS: After returning to the criminal underworld to repay a debt, John Wick discovers that a large bounty has been put on his life. – via IMDB

I’m pretty sure you all know that I am a pretty huge fan of John Wick, and I have been eagerly anticipating this sequel for quite some time. I trekked off to the cinema opening weekend for this, and I was not disappointed. It is a strong sequel to be sure. This is what most sequels wish they could bring to the table, but fail at more often that not.

Chapter 2 is everything John Wick was, but amplified. Bigger guns, more bullets, more hand to hand combat than you can shake a stick at, just more extravagant everything. It has plenty of throwbacks to John Wick, which is amusing. There is much of the same, but more, if that makes sense. The movie is exciting and the action is engaging, and again it embraces the fact that the story is relatively skinny and rolls with it, and so the viewer is, irresistibly, drawn in all over again. The movie keeps it simple with the story, and indulges with the visuals and the score. I also really enjoyed the humour that was present in Chapter 2 – still my kind of humour. Keanu Reeves dominates as John Wick, and I simply love watching him in character. Ian McShane is, as always, a joy, and Lance Reddick also brought the goods.

All that being said though, I also had some issues. I felt the movie was a touch long, and while finally getting to see more of this super mysterious, elaborate assassin/criminal underworld, there were some niggles to be had. I am looking here specifically at the end, making it look like every single person in the whole city has ties to this underground organisation. Really? Sometimes the humour also didn’t land quite as quick, fast, and slick and the predecessor.

While Chapter 2 is an entertaining watch that hooks you from the off, I just don’t see how and why it is considered to be the superior of the two films. Totally worth the watch though, and definitely a movie I will be revisiting. It is smooth, well choreographed, exciting, stunning to look at, and is just plain fun. Absolutely recommended.