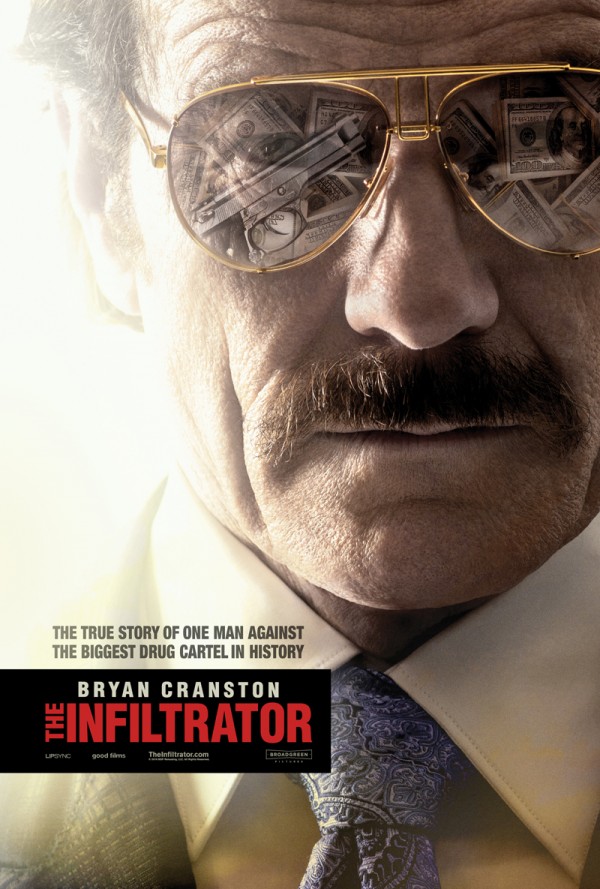 “This is what I do. I’m an undercover narcotics agent, I sit with murderers and made men and I lie. I lie my ass off.”
– Robert Mazur

I was definitely up for checking this out because, well, Narcos totally has us hooked on anything pertaining to Pablo Escobar at the moment, and not to mention Bryan Cranston being a huge draw on his own. Back in the drug game? All aboard! I was pleased to see John Leguizamo in here, as I quite enjoy him, and Diane Kruger provided a solid performance, too. The performances were all quite good, although there were a lot of characters who were skipped over. The Infiltrator gives you the information you need for the movie in the setup, and then runs with the sting. My biggest issue is that, while this was good, it missed its chance to be great. All the potential was there, but the movie played it too safe and didn’t go for the guts. I was a fan of the way relationships were depicted in this, giving the viewer a look at how a situation can get sticky when you are undercover because you really can end up liking the people you are investigating, so situations are not always ideal, and they do have crazy effects. The biggest issue is that, while the cast was good, one would expect more about Escobar and his insane cocaine cartel, and the plot never really went all in, and the vestment of Mazur getting bust were relatively low. The poster makes it look like this guy went up against Escboar and survived, when in reality it was very little of that. The movie had the potential to pack more punch than it ultimately went for. This means that the movie is good, but it never hits the highs you want for it. Worth a look see, at any rate.