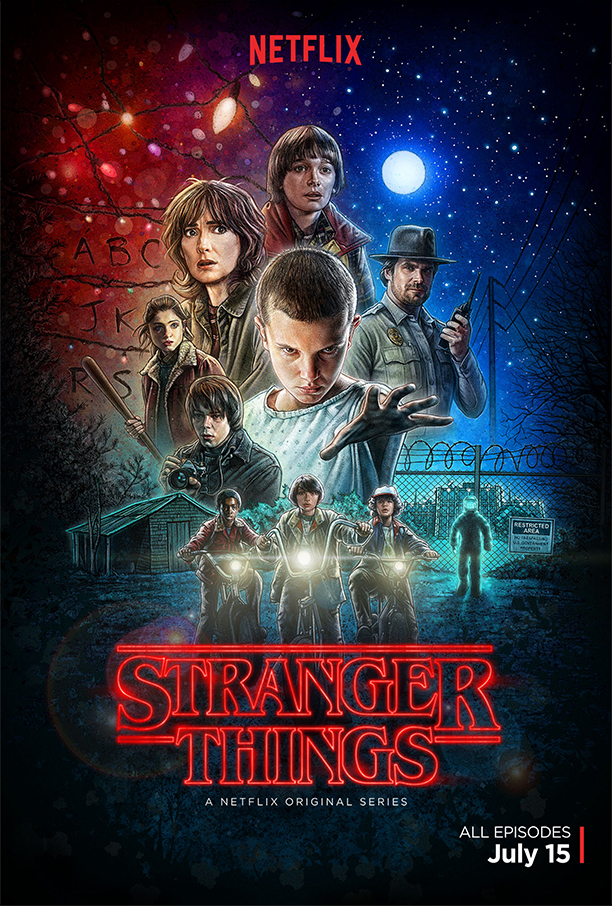 I was so eager to check this out. I saw a trailer for it a few months back, and thought it looked like something that was totally up my alley. Then it released, and the reviews came back really positive, so I knew that I just had to get on it. Well, my husband and I watched it in three consecutive work nights, and then we were done. Done, and sad, because it is over now for a while. The minute this show started, I was pleased. It had a dark, creepy intro scene, some unseen monster, and then some ridiculously simple, cool opening credits. Everything was so eighties and old school and horror like, I was happy. The characters are introduced to us, and they are quite sweet, or interesting, or strange, depending who you meet. The boys and their Dungeons and Dragons tournament was endearing, and from there, the show kicks in.

Stranger Things features a lot of heart, and that was cool. Yes, shows have relationships and you get invested, I am not disputing that, and great friendships. But Stranger Things shows you about the deep bonds that kids form as friends, their innocence at adding a latest, mysterious addition to their little ensemble, the love a struggling mother has for her child, and the ties between brothers. It was quite multilayered, and worked wonders.

Let’s talk about some characters I really liked. I was a big fan of Hopper – no matter the washout you think he is, the man has a cop’s brain, and is extremely good at what he does. He is also a tortured dude, but does his best to help people, even if he would prefer it happen after coffee and doughnuts. Then there is Mr Clarke, and he is just awesome, and brings a lot of humour to the screen, which I love. He is also a great teacher, and encourages passion for these kids, which is awesome. Winona Ryder is in fine form here as Joyce, and totally brings a lot to the table.

The kids need their own paragraph. Eleven is a great character, and Millie Bobby Brown played her so well. You pity her, but you also sort of fear her (because let’s face it, she is a bit of the unknown). She learns about all these totally foreign concepts (friendship, promises, etc.) and picks up on these things and embraces these concepts with open arms, without questioning, as only a child can, despite whatever has happened to her. Let’s not forget about Dustin, Michael, and Lucas here. These kids had their friendships with one another tried and tested, and are all at that age where things start to change in their lives. They learned more about trust, honesty, courage, and bravery in a short period of time than they would have even if years had passed. Of the original group of boys, Dustin was, without a doubt, my favourite. He is hilarious, has heart, tries to keep everyone happy and together, and has a real smart mouth. Definitely love!

Stranger Things is a tense watch, and draws you into this fictitious world effortlessly and completely, and while you know that so much that is going on is fantastical and bizarre, you totally just give in and take it on. You get invested. While they did not show too much of the monster, I still feel that they showed too much. I am all for the less is more when it comes to monsters. Give me flashes, give me more atmosphere, and while the show handled that successfully for the most part, I still feel that we saw too much of the monster, and it totally killed the freaky vibe with it. Anyway, all that said and done, Stranger Things is fantastic, and I enjoyed the heck out of it. All I  can say is watch it. Watch it now.