Here we go again. Another extensive look into the insides of people. How many more of these are there? 10? 11? Yeesh. A man can only take so many guts and swirling camera flashbacks. Jigsaw is dead now, right? So he can’t whisper for 130 minutes? Right? RIGHT??

SYNOPSIS: Despite Jigsaw’s death, and in order to save the lives of two of his colleagues, Lieutenant Rigg is forced to take part in a new game, which promises to test him to the limit. – via IMDB 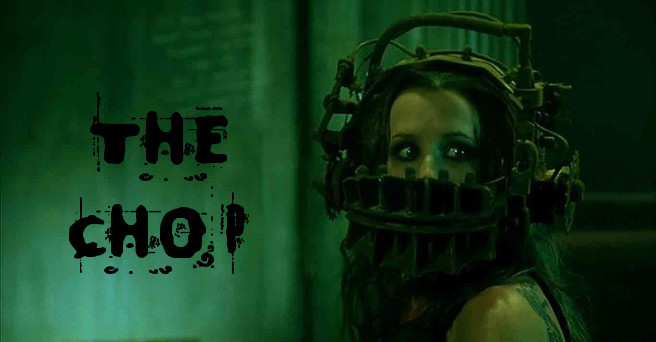 Let’s start this piece off to do a little housekeeping and see if Bousman and the boys clean things up… by my record, still unaccounted for are: Elwes, Marky Mark’s brother, the guy from Braveheart and the guy from Braveheart’s daughter. I suppose Monica Potter and her daughter, Marky Mark’s brother’s kid and Jigsaw’s wife are just footnotes out there? Do they make comebacks in this series? We also still don’t really know why they killed the lady cop? Or how they could possibly AFFORD to make all of these elaborate traps to disgustingly kill people? We saw some boobs in the last movie – will we get some more? Will we see a pee-pee? Will there be even MORE and MORE rotating cameras and extensive flashbacks? Will this make me want to wretch?? I guess we’ll see. SPOILER: I did just see a #DeadPeePee ….. X _ X

So wait just a fucking second… SPOILERS This opens with this autopsy scene and they pluck out his stomach and there’s a tape recorder in there and this cop listens to it and then two guys are chained up and one of them kills the other one and then the dark skinned cop from the last two movies gets put into a Jigsaw game and then so does his boss and Marky Mark’s brother has been gone for six months and all of this stuff happens and then it’s actually concurrently running at the same place in time when the third one ends?? And this all takes place in 90 minutes?? HUH? WHAT? It’s obvious the cop is UPSET when he listens to Jigsaw’s tape recording but he’s actually the one killing everyone?? HUH???? WHAT????? This makes no fucking sense. If the beginning is actually the end then wouldn’t they have rescued that FBI guy when they gathered up Jigsaw’s body?? And the black cop?? Wouldn’t they identify the bad cop??? What the fuck? 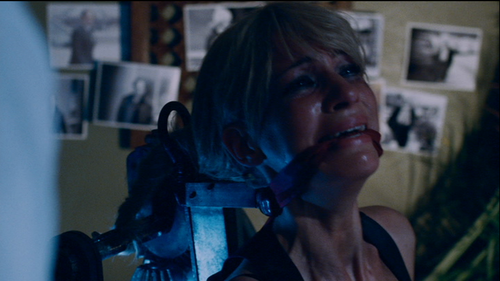 Also – this all takes place in NINETY minutes?? Blogga please. No way that happens unless they have Star Trek transporters. I don’t hate these movies but there’s something I have to address. These unbelievably elaborately architected traps someone keeps setting, all of the tortured and anguished screaming and moaning that goes on, all of the NOISE that these machines make when they are grinding and smashing people to pulp – all of the project that goes into setting these things up –

HOW THE FUCK DOES ALL OF THIS GO UNNOTICED???

This cop comes home from work. His wife has been there all day (seemingly) and she’s packing a suitcase to go visit her mom or something like that. The cop goes to sleep and wakes up when he hears a noise. Somehow, the way I see it, while he was slumbering, someone came into his home, taped DOZENS of pictures around this one room, installed a large wall timer, wrote some letters in blood on his wall, put together this chair that’s going to rip this woman’s scalp off, and put a half dressed woman into the device and placed one of those pig masks over her screaming head. All while he was sleeping. He couldn’t have done it while the wife was home, right? 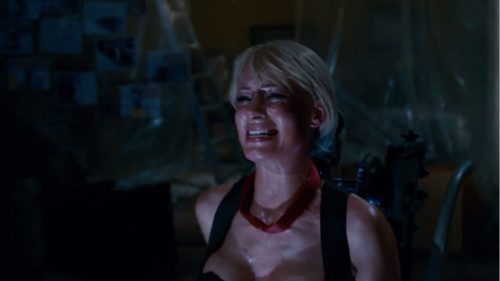 Oh well. As a movie overall, aside from the last two paragraphs I wrote, it’s not too bad. It’s better than 1 and 3 in my opinion. I couldn’t get over the poor poor acting in the first one and the third one was just fucking gross. All of the movies suffer from being WAY over edited and this one didn’t disappoint with the sweeping in circles flashbacks explaining everything.  We did get some closure on Marky Mark’s brother and the guy from Braveheart though we still don’t know about his daughter or whatever happened to Elwes.

I guess we get some insight into why Jigsaw does what he does but it still doesn’t make any fucking sense. His wife lost their baby in a tragic accident so now he murders EVERYONE? K. If I did learn one thing from this… Jigsaw’s wife has enormous cans. That would have been a lucky baby suckle suckle.

Looks like Julie Benz is in the next one… YAY! I swear she’s the WORST actress….

First thoughts? 95 minutes looks a bit more realistic! That last one was ridiculously long. Not cause it had a story, nope, but just because it wanted to curl your toes. And not in the good way, either.

Seriously, not long into this movie and it begins with me thinking: “OMFG, really?!” More sif shit on the brain bit? Will they ever let this go? Come on!

Not only was the whole brain thing rehashed, there was a really uncalled for in depth port-mortem. Definitely didn’t need that, and yet they added it in anyway, because this would totally not be Saw anything without it.

Second thoughts? Well, maybe not second thoughts, I have had a whole bunch rush through my head by now. Okay, enough bumbling. Where was I? Oh, oh, I have seen this one, too! I still can’t remember if I stopped at this one or the next. Shows you how memorable they are after the fact.

The Saw movies truly are all about making you squirm and cringe, big time. While this one was nasty at times, it never reached the depraved depths of the last one. I am rather grateful for that.

This movie finally deals with the continuity of Detectives “Kankle” Matthews and “Ribs” Kerry, which, in my opinion, was long overdue. I would like to give these movies credit though for really pushing for the continuity and trying to keep everything tied together. Consistency, and it is pretty solid here. Solid does not mean believable or good though, it just means that they stick to things throughout.

LOL, check  out Scott Patterson here folks! Whoop! I will always look at him and think of him as old Luke Danes, the grumpy gills who runs a diner out in Stars Hollow. And he rocks as Luke, for reals! Okay, I guess this is totally not the place to discuss something as incongruous to Saw as Gilmore Girls.

However, before you know it, he is the best thing about this movie. Danes actually gave a pretty damn good performance to boast about here, and he was pretty much the only character I honestly bought into. He was smart, determined, dedicated, the whole katoot. Pretty badass, too. Truly made this worth it – I don’t know when last there was actually a character in these movies I gave a rat’s ass about!

I think my biggest issue with this movie is the fact that I can’t buy into all of this going down in 90 minutes – they got Jigsaw’s ex-wife in for questioning, traversed all the crime scenes, continued the investigation, everything in 90 minutes, concurrently with Rigg running and playing Jigsaw’s game? Okay, let’s be honest, I would not say that buying into anything in these movies is easy, but if you suspend belief you can, in some sick way, picture this shit going down. But I just can’t suspend so far that all of this would tie in with the last movie and that it is all going down at exactly the same time, within ninety minutes. Sheesh. What crap!

While there were some gruesome traps again, I thought that a particularly nasty cringe trap was the face knives contraption

Gosh! Can’t tell if it is vanity or if it is to do with the fact that no human being wants anything near/in their faces fucked around with – eyes, ears, mouth? Stay away!!

As far as the sequels go – I would say this is, without a doubt, one of the better ones. It tried more successfully for a backstory, and managed to give us one, to show us Kramer/Jigsaw, though he still seems like a bloody weirdo and control freak, and shows how his whole world collapses. Doesn’t make any of this any better on his behalf though. Also – this one isn’t so offensively loud as the others (yes, yes, common complaint).

The whole movie was about this detective listening to the tape, to set up the next film basically? Uhm… well done? Good for the plot twists at the end though, it has been the best one since the first Saw movie.