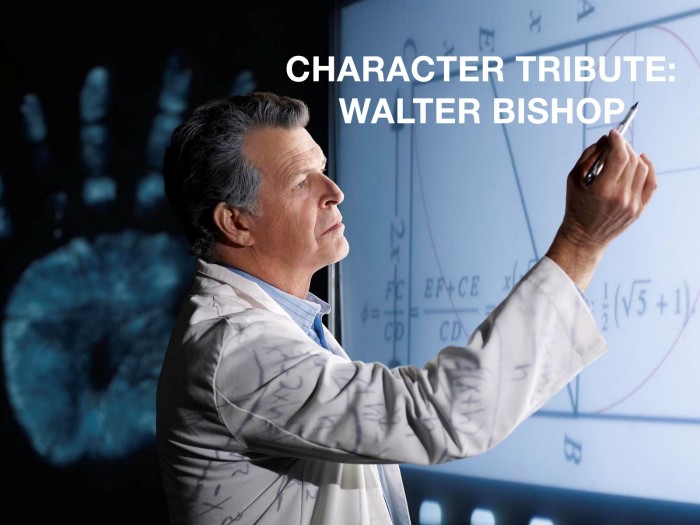 Walter Bishop – one of the most amazing characters on television ever. He has the ability to crack you up, but is also the one to evoke the strongest sense of emotion from you in the blink of an eye. A genius, definitely crazy and a massive lover of sweets and food, Walter has a mind that you envy and pity in equal measure, depending on what is going on, but his brilliance can never be denied. Fiercely loyal and absolutely awesome, I am pro Walter Bishop forever!

First and foremost, don’t ever mess with Walter and his pudding.

He loves his drugs. Always had a soft spot for recreational drug use. His favourite, though, seems to be LSD.

Living with Walter must be an experience, especially considering he is mostly in the nude at home, or doing experiments in the wee hours of the morning in his underwear.

Walter really has made the lab his home, and he isn’t more comfortable anywhere in the world.

His love for Peter truly is boundless.

His indignation about Faulivia’s deception.

Such astute observations at the best of times.

His ability to take things from absolutely hilarious to dreadfully painful in a heartbeat.

He can get really snappy and rude when he is under pressure, though he never does it to be a total dweeb, he just isn’t blessed with the most patience.

Walter was always cooking up experiments and having such fun.

The relationship between him and Astrid is absolutely beautiful.

His addiction to Red Vines is legendary.

Sometimes he can really come across as paranoid… yet he does it with such style!

Walter can get so enthusiastic about things, and I love how he always drags Astrid into it all.

Never, ever to be known as the prude 😛

The time he had that awful acid trip, the pity that I felt for him was profound. Plus, this shot was stunning!

When he ran to hug Olivia after not seeing her for over a decade? OMG IT HURT!

The names he had for Astrid never ceased to amaze me, though my favourite will always remain “Ostrich”.

Pot smoking with Nina in the park, but never fear, he has a medicinal licence!

The tulip, Walter’s sign of hope and forgiveness, laced throughout the show. It is actually so important and beautiful.

The childlike tendencies that Walter can sometimes exercise. I envy him at times.

He sees things completely differently, no matter how serious it all gets.