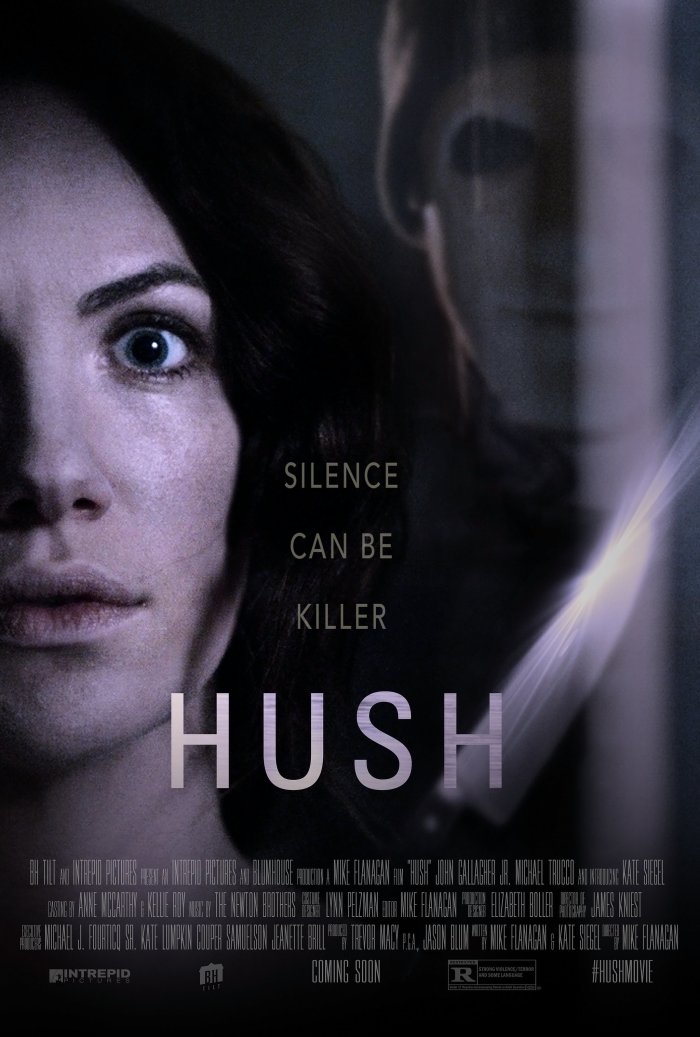 “I can come in anytime I want. And I can get you, anytime I want. But I’m not going to. Not until it’s time. When you wish you’re dead… that’s when I’ll come inside.”
– Man

SYNOPSIS: A deaf writer who retreated into the woods to live a solitary life must fight for her life in silence when a masked killer appears at her window. – via IMDB

Well, well, well. Here we are with the latest Mike Flanagan film. You all know I was a huge fan of Absentia, and I liked Oculus just fine. I was all for his new movie, Hush, and was stoked when Netflix put it out so early by us. I was intrigued by the concept, it sounded a little different than your usual home invasion movie. For all intents and purposes, this should have been great, but it wasn’t. Not that it was bad, obviously (my score reflects this), but I just feel that some things fell flat. The biggest offended for me was the Creepy Stalker Dude losing his mask so early on. The minute it came off, he became just a man, no more, no less. This Stalker Dude is playing games with Maddie, the deaf and mute woman who resides in the isolated cabin, and there are thrills and there is some immensely flawed logic. By reading all of that, what I am essentially saying is that this movie isn’t a game changer at all. Nothing new, no change to the recipe (except for the victim being disabled, so it puts a new spin on things). Kate Siegel delivers a strong performance as Maddie, but I felt that John Gallagher Jr. was just a bit flat. He never actually terrified me, drew me in, made me wince or worry. It wasn’t a bad watch, the movie didn’t drag out (it has a runtime of 81 minutes), and keeps you entertained, but sure as heck won’t stay with you when all is said and done.