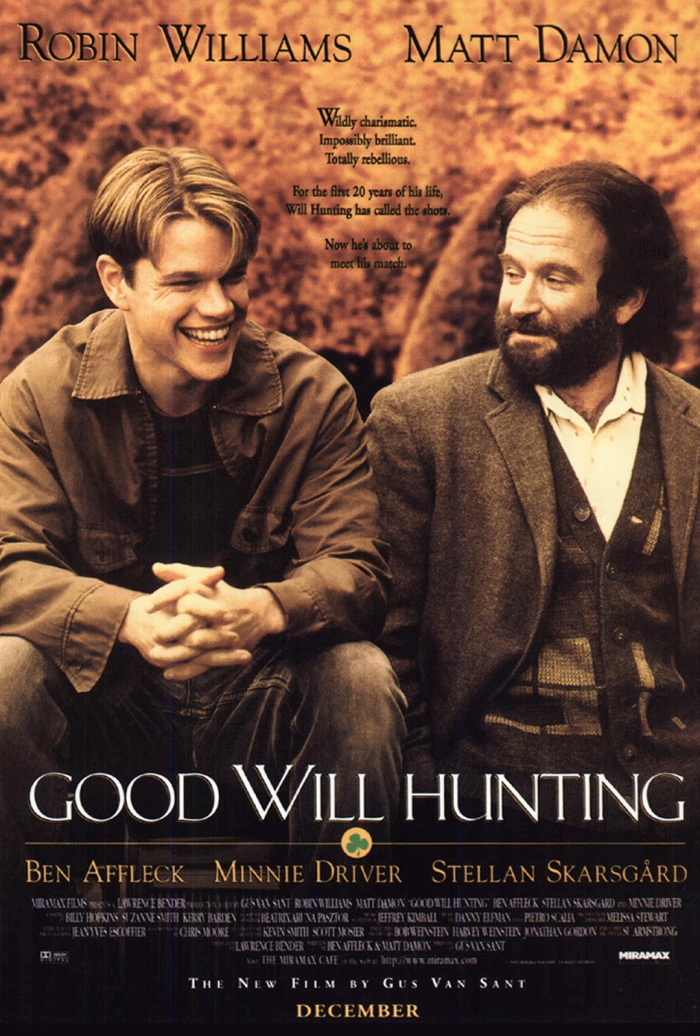 “You don’t know about real loss, ’cause it only occurs when you’ve loved something more than you love yourself.”
– Sean Maguire

SYNOPSIS: A janitor at MIT, Will Hunting has a gift for math and chemistry that can take him light-years beyond his blue-collar roots, but he doesn’t realize his potential and can’t even imagine leaving his childhood Boston South End neighborhood, his construction job, or his best friend. To complicate matters, several strangers enter the equation: a brilliant math professor who discovers, even envies, Will’s gifts, an empathetic shrink who identifies with Will’s blue-collar roots, and a beautiful, gifted pre-med student who shows him, for the first time in his life, the possibility of love. – via IMDB

This movie is one of those movies that is just really good, whether you are in the boat of it being overrated or not. Either way, it’s a good one. I adore Matt Damon and will watch him in anything (hence I made it through Elysium), and I think he is immensely talented. That was showcased once again in Good Will Hunting. The movie is one of those films that makes you laugh a lot, feel for the characters, and touches on some things that make you think (pretty much anything Sean Maguire said in this movie was something to think about). I thoroughly enjoyed seeing how insanely smart Will was, dissing college students yet being a janitor who is actually just too scared to reach further in his life. The humour in this movie is sharp, and gets me laughing every time, and Casey Affleck’s character was just adorable (what a chop). The story is really good, and moves along at a respectable pace, never getting boring, never getting so intricate that you lost what was going on. Robin Williams was something else in here, and I loved his character. This is one of my favourite roles of his. Sean Maguire was depressed, so flat, and yet he had so much knowledge to share, and was an integral part of Will realising there was nothing that he couldn’t do. He and Damon worked wonders together. The story is sweet and inspiring and has aged pretty well. I think Ben Affleck and Damon are very good writers, no matter how you feel about it. Minnie Driver is someone you don’t see in many films anymore, but she embodied Skylar very well, and I thought that Stellan Skarsgård’s Lambeau was a fantastic character to put Will’s gifts into perspective with, though I do feel his character was not used as consistently or as effectively as he could have been. Good Will Hunting is shot well and is engaging, and it just so worth the watch.