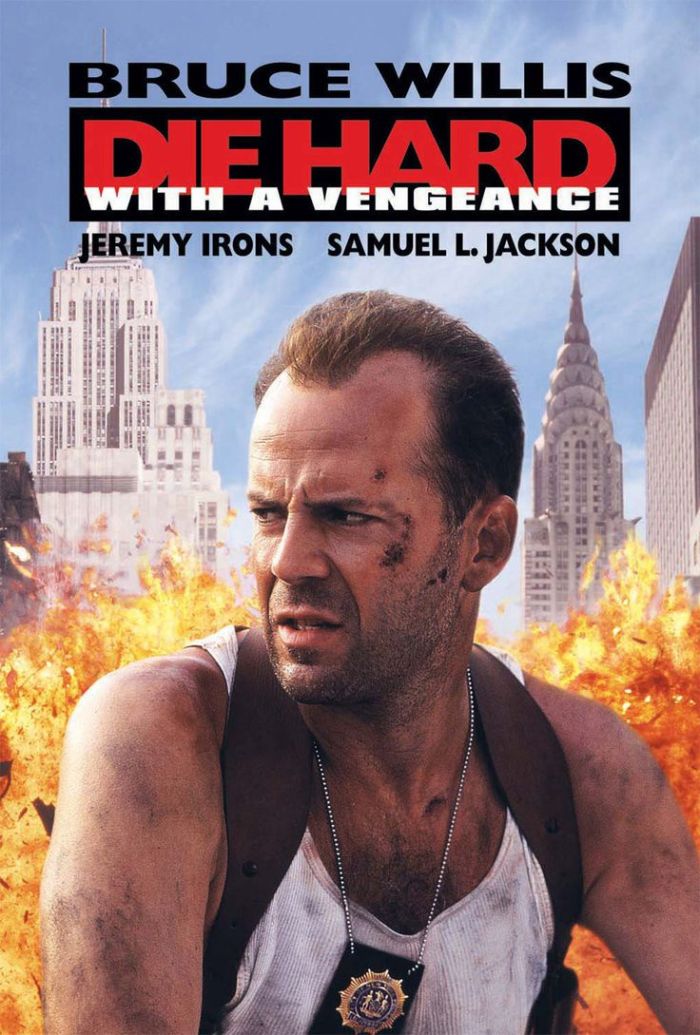 SYNOPSIS: A man calling himself “Simon” begins a reign of terror in the streets of New York: he threatens to detonate bombs around the city unless Detective John McClane cooperates in a game of “Simon Says”. McClane has a bad hangover and a bad attitude, and isn’t in the mood for games, especially this one. – via IMDB

So, this one started out and is definitely different from the previous two. Something I was not a fan of, and I don’t care what anyone says about it, it is the race card. I know this is an old movie, and I know it was brave for the time, but I am so over hearing about “it’s because I’m black” and “it’s because I’m white” – and before you judge, chill here in South Africa for a little, and we will see how you feel about it then. It was relentlessly hammered in, over and over, and it was so unnecessary. It did not make me laugh. In fact, it just peeved me, as you so obviously can tell. Really bad. Okay, now that we have the race card bitch session out of the way, let’s move on to the movie. What I did like about this was the riddles, which gave a smarted edge to the movie, something that was not exactly present in the last one. However, it also featured characters I did not give a crap about and didn’t care to see whether they made it or not. The main villain was interesting, and I suppose it was good for tying the movies together, but this just wasn’t my favourite. I wonder if these movies really are just a male thing? I don’t know. It was shot quite well and looked pretty good, but the movie just never sucks you in the way it is supposed to, and Willis just came across as a little tired here, which is a pity, because he is usually the best thing about these films. Jeremy Irons was a solid pick for Simon, and definitely was worth a watch. Better to see him in person than to continually hear him on the phones. Uhm, again, don’t really have too much to say about this. I do feel that the movie picked up when it was established that the Federal Reserve was being hustled, and that’s where it got interesting and worth watching, but it is a long prelude to that, and the racial angle is littered throughout, so it makes for a chore to watch.