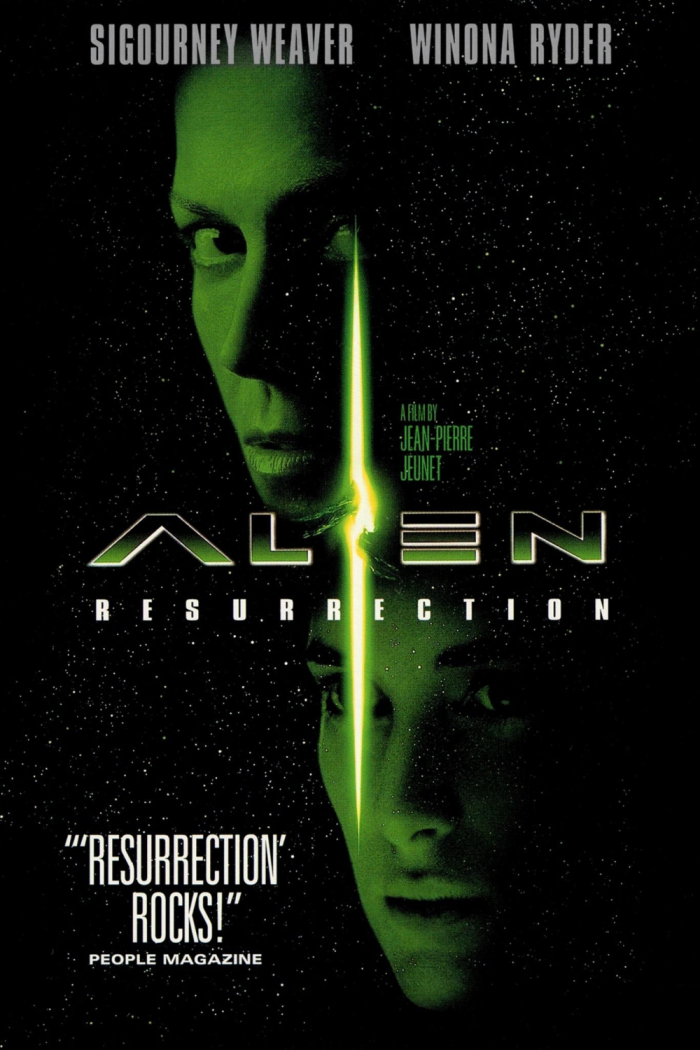 “There’s a monster in your chest. These guys hijacked your ship, and they sold your cryo tube to this… human. And he put an alien inside of you. It’s a really nasty one. And in a few hours it’s gonna burst through your ribcage, and you’re gonna die. Any questions?”
– Ellen Ripley

SYNOPSIS: Two centuries after her death, Ellen Ripley is revived as a powerful human/alien hybrid clone who must continue her war against the aliens. – via IMDB

Alien: Resurrection is, without a doubt, infinitely better than its predecessor. Not that the film needed to be amazing to trump the last, but still. This movie isn’t the most amazing for me though because I was not a fan of the Ripley portrayed in here. Not because Sigourney Weaver wasn’t good, but because this is not Ripley, and yeah, yeah, I know this isn’t the Ripley. She was just too different, which is sort of the point, but still.

The story is pretty interesting in its own right, what with continuing about two hundred years after the fiery incident on Fiorina 161. Ripley has been cloned so many times to perfect her as the carrier of the xenomorphs and the scientists successfully manage to birth one from Ripley. I loved seeing super smart xenomorphs again, because a slower one is just not as terrifying. This lot? They were ridiculously smart and scary and dedicated to escaping and taking over the world, muahahahahahahaha! Oh, excuse me, let me just get back on track. Anyway, Ripley is super in tune with these new xenomorphs, and they have a whole bunch of things that make them super creepy (seriously, their swimming skills were scary!) and a force to be reckoned with.

The movie is shot well, though it does, naturally, suffer some sketchy CGI, but at least not like the last film. I really liked that horror clone room that Ripley entered – that was some seriously sick and grisly stuff. Something that really put me off of the movie, too, is the inclusion of Ron Perlman. I just don’t get why the guy is so famous – he irritates the crap out of me and is so corny, and not in the good way, either. My fiancé reckons he looks like a bulldog. Not far off. The man is a freaking annoyance of note. Then there is Winona Ryder, back before she was robbing the world blind. She was pretty good here, but this is certainly not her finest role. The humour was exceptionally forced in places, too, which sucked. Oh yeah, let’s not forget that weird final xenomorph o.O

Not a bad film, but it is a long way away from brilliant. It has some decent moments, but overall some of the writing and characters just let the film down.