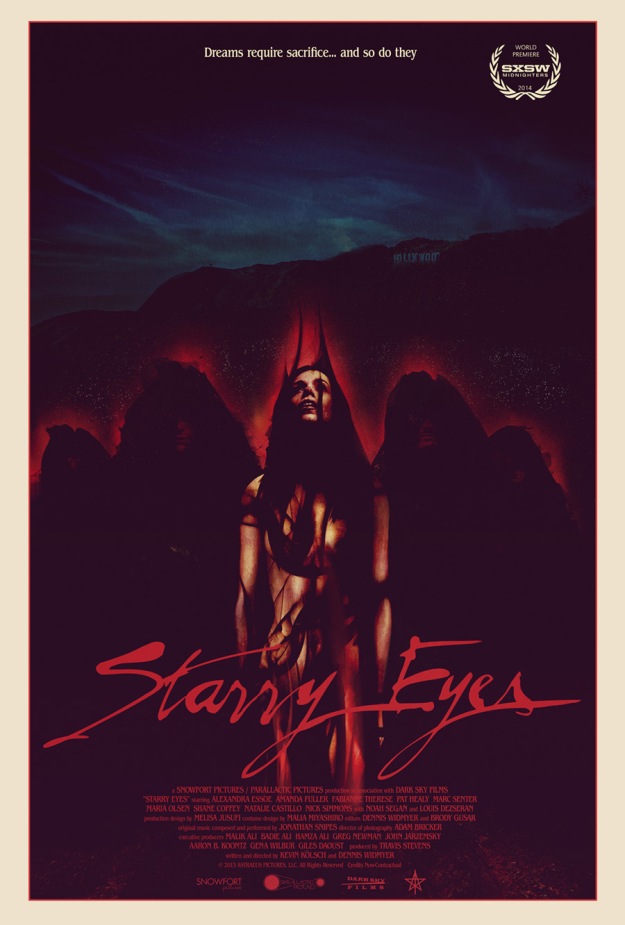 “Ambition: The blackest of human desires. Everyone has it, but how many act on it?”
– The Producer

SYNOPSIS: A hopeful young starlet uncovers the ominous origins of the Hollywood elite and enters into a deadly agreement in exchange for fame and fortune. – via IMDB

Alright, let me get this out right now so that we are not misunderstood. I liked this movie okay, but I certainly didn’t love it to death. Sorry Eric and Ryan! But I liked it well enough, and I thought that it was shot and put together really well but I had some issues with the pacing throughout the movie. Starry Eyes was far longer than it had any need to be. I must say that the effects and makeup were just great – so disgusting! Ew! Also, the change that Sarah underwent was phenomenal, and the movie got really dark when taking us through that change. Yucky, is all that I can say, and that is where the makeup and effects get their major praise. Fabianne Therese portrayed Erin really well, and I can tell you with sincerity that I absolutely could not stand her. She was a bitch and a worthless “friend”, who was selfish, greedy, nasty and rude and I didn’t like her, not one little bit. Starry Eyes did not really focus much on character development outside of Sarah, which is a pity seeing as a more realistic dynamic between the friends could have done wonders for the film. Alexandra Essoe did give a brilliant performance though, I really liked her. I must comment on the piano-based score for this, which was just exactly what it needed to be, and certainly lent a whimsical feeling to the film. There are things the film did right, and a lot that just didn’t quite work out so well for me, unfortunately, and is forgettable in the long run for a lot of reasons. Starry Eyes felt like it dragged a lot in places (as I said, far longer than it needed to be). There isn’t actually really much more that I can say about this, aside from the fact that it is a decent watch.