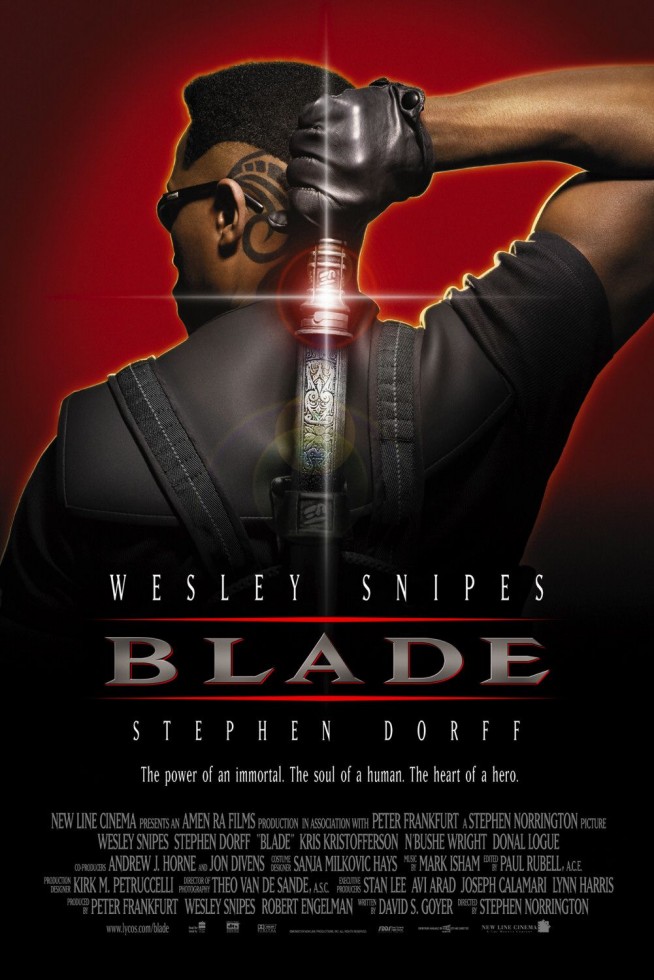 “There’s a war going on out there. Blade, myself, a few others, we’ve tried to keep it from spilling over onto the streets. Sometimes people like yourself get caught in the cross fire.”
– Whistler

SYNOPSIS: A half-vampire, half-mortal man becomes a protector of the mortal race, while slaying evil vampires. – via IMDB

Ah, Blade. What can I say? I am a fan. I loved the hell out of this when I was growing up, and I still have so much fun when revisiting it. There is so much to love about this movie. The cheese, the super exaggerated corny punchlines, the semi-sketchy acting… all of that just comes together to give us Blade. One of the more grittier comic movies of its time, it still holds up pretty well even after all these years. The plot is not as intricate as it could have been, but it was just what it needed to be to market us a successful action film. Granted, the CGI hasn’t really aged that well, and there are times that it doesn’t look as great as you would like, but if you watched this film when it was released, you will know what I mean when I say that this was just pure action and fun, not being inundated behind way too much history or talking or anything. They lace Blade’s story into the narrative very quickly, and then they move right on from that to hunting and killing monsters, and it is a pretty sweet ride to go with. Also, these vampires don’t sparkle. Do you remember what it was like to actually have vampires that didn’t glitter in the sun and carry on like a bunch of sissies? Yeah, I remember those days. That’s what you expect from a vampire flick. Wesley Snipes dominated as Blade, Kris Kristofferson is a wonderful Whistler and I like his no-nonsense attitude, and N’Bushe Wright was pretty much on the periphery for me as Dr Jenson, not interesting enough to become vested in, but not boring enough to be completely forgotten. Stephen Dorff stepped up for his role of evil Deacon Frost, and he was pretty good, worthy of standing opposite Blade. I don’t know how much someone would enjoy this movie if they didn’t see it before the comic book films of our current day and age stepping in to dominate the box office, as it doesn’t follow quite the same recipe that most are used to nowadays. However, there is a reason that Blade was so popular, and considered a cult classic.