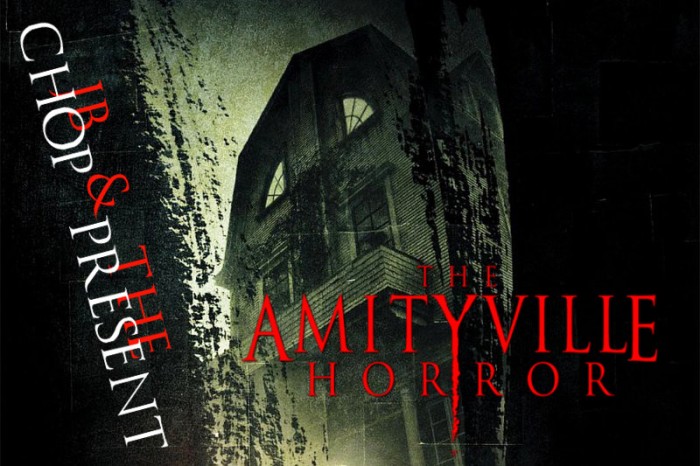 This is it!! This is the end!! I hate to speak for JB but I (we) hope you’ve enjoyed this run! These movies have been 99% shit but I’ve had a good time. I don’t think JB has but hopefully our relationship can withstand it. I want to thank you, JB, for enduring this with me – I know you might have hated some of these but THANK YOU! You are very dear to me! On a side note – I wasn’t able to find this movie anywhere so I couldn’t watch it. It was on Netflix streaming at one point but it’s gone now. The only thing I found was a 30 dollar copy on Amazon and fuck it if I was going to spend that much money on this wretched looking thing. I’ll have to get creative in my part here….

SYNOPSIS: Lisa Templeton begins a new job as a cleaner at High Hopes Hospital, a mental institution in Amityville, Long Island. Initially delighted to get the job, Lisa soon realises that all is not as it seems. Intimidated by staff and the psychotic ramblings of the patients, she is further unnerved by apparent supernatural occurrences on the night shift. To preserve her sanity Lisa must uncover the mysterious history of the institution and it’s inmates. But the truth is far more terrifying than she could ever imagine. – via IMDB

So the last time we did one of these where I didn’t get to watch the movie, I did a little piece based off of the IMDB reviews but I think this time I’ll go with what Google images have for me. First up it’s this:

That looks like some horrible over acting by someone who was probably not paid very much to be in this thing. I’m starting to be proud of not buying that 30 dollar DVD. It wasn’t even a Blu-Ray – a DVD for fuck’s sake. Second from the search engine:

Jesus Christ what are they going for here? This looks as bad as the last one. And that was the biggest pile of shit I have ever seen. “You. Sit there and act like you’re crazy. Thanks” I believe that as an actress named Eileen Daly and she is credited as “Sadie Krenwinkel”. Worst name ever. I do remember her though from this miserable movie I watched a while back called Sacred Flesh. It was terrible and you could read about it HERE if you wanted. HAHA That post is pretty funny.

I don’t even know if pic 3 is from the movie, but I’m guessing it is based on the hole in her head and that stupid fucking movie poster. This movie looks like it absolutely sucks donkey balls.

Thanks Google for this:

This next one isn’t from Asylum – it’s from Under the Skin! That’s a strange movie I talked about once which you could see HERE if you felt inclined. That’s a long, boring movie but we did get to see Johansson’s bazoongas so I guess it was worth it.

You know what, fuck it. This is the last one we’re doing so let’s look back at some of the actual highlights from this series. My favorite part had to be in the one where the chick’s reflection made it with herself. Classic!

Of course, the best movie of them all was the remake. Not only was it a GOOD movie but we also got to see some Melissa George on screen. She’s so fucking hot there’s steam coming out of my ears…

Of course, I can’t do a recap without mentioning that I got to see Lois Lane’s boob in the original!

Let’s just go ahead and finish this up with some more lingering around the remake. Great cast, great scares, great visuals and Rachel Nichols:

JB, I know you didn’t like these movies but it is always a pleasure to work with you. If you ever want to do something else – you know my number!

First off, I would like to start this all off as follows:

Now that we have established that, I suppose you want me to talk about the final chapter of this insane project we undertook? Well, alright then. For old times’ sake!

I am so over seeing the whole DeFeo family murder time and time again. It is brought up in just about every darn movie, and it is old. And tired. And silly. I wish they would move on. Anyway, again we weren’t in the house, but then we found out that some doctor had bought the land of 112 Ocean Avenue and turned it into a mental asylum, so there is that.

I am celebrating, though. No matter what type of movie this last one was going to be, finally being free meant that I was going to celebrate my freedom!

Lisa was such a bland character, truly. She was boring, and her interview? Could she have been any more unprofessional? Chipped black nail polish, hair that hasn’t seen a brush in God only knows how long, and then when she sneezed on him? What the hell was that all about. Obviously she gets the job (duh, we need a movie somehow) and she could not have been any more awkward and unprofessional when accepting the job. This man is not your friend, you cannot talk to him like that. Super shocked me hahaha.

Have I mentioned that I am so happy to be through all of this? So blissfully free?

The progression of this movie was so absurd. Really. It took forever and six days to go anywhere, and even then didn’t really achieve anything. Seriously. That was just annoying. You cannot miss the fact that this is a budget film. I don’t mind budget films, they can even look like a budget film, but please just have something decent to bring to the table to make the whole ordeal worthwhile!

Super impressive – and no, it wasn’t fun.

The dialogue is so freaking shitty, cringe-worthy and stupid, and the characters were ridiculous! All the interactions between people and everything is completely unbelievable. Meh. They even went for some Shutter Island twist that failed miserably.

There was also no talent to be found here. Instead all the movie went out of the way to do was make you awkward and uncomfortable by being crude, talking sex (more like rape and coercion) and horrible name calling. I mean the two night orderlies/doctors//security guys/freaks were nasty, then there are the cuckoo crazies downstairs, and they are also so great in terms of discussing their sexual organs and talking to Lisa.

As bad as this movie was, it is still nothing when compared to The Amityville Haunting. Really. Nowhere near as that. I suppose it not being found footage helped a lot in that regard, but it did nothing to save this at the end of the day. I think more found footage would have been the last straw for me. You can still see that this is an itty bitty budget film and that comes through thick and strong all the time.

Delaney was one character that, though cheesy, didn’t grate on my absolute last nerve, so there was that. One of the better things about the movie, and even then flawed.

Now, the only remotely cute guy that got thrown in for all of like… two minutes was Matthew Batte. And not even in the conventional role, either. He was really batshit crazy. The whole scene where he popped that prick doctor Pemberton just to get keys to kill and scarf the crazy next door was probably the only scene in the whole movie that had anything going for it. They really should have branched out more into the people in the ward, and if the “haunted land” which they were on was getting to them, too.

The logic was so embarrassing, too. For instance, the one guy gets popped, and Lisa is crying all over him while the shooter and his shotgun stand before her and a corpse. Never fear, though, because he’s pretty respectful. He gives her a few minutes to cry and say her goodbyes while the guy is dying, then when he is dead after a few minutes, only then does he decide to fumble for a fresh shotgun shell for a possible reload, and then waits for her to take off before moving on after her. What the hell?!

Anyway, whatever. All I know is that we made it to the end of this and I sincerely thank all of you that have stuck this series out with us, enjoyed the reviews that we loved writing (even though the viewing wasn’t always as entertaining). We have practically run Shitfest Fridays for around two months, and it has been an absolute blast having you all participate, comment, joke and mock along with us. You guys rock!