Guess what?! It’s another Friday, meaning another Amityville review! When Eric told me that he liked this one more than most along the line, I was definitely trying to optimistically perk up. Now, after the abomination that was The Amityville Curse, you could understand how anything could be better. Now, while this was marginally better, it was still just so crap! 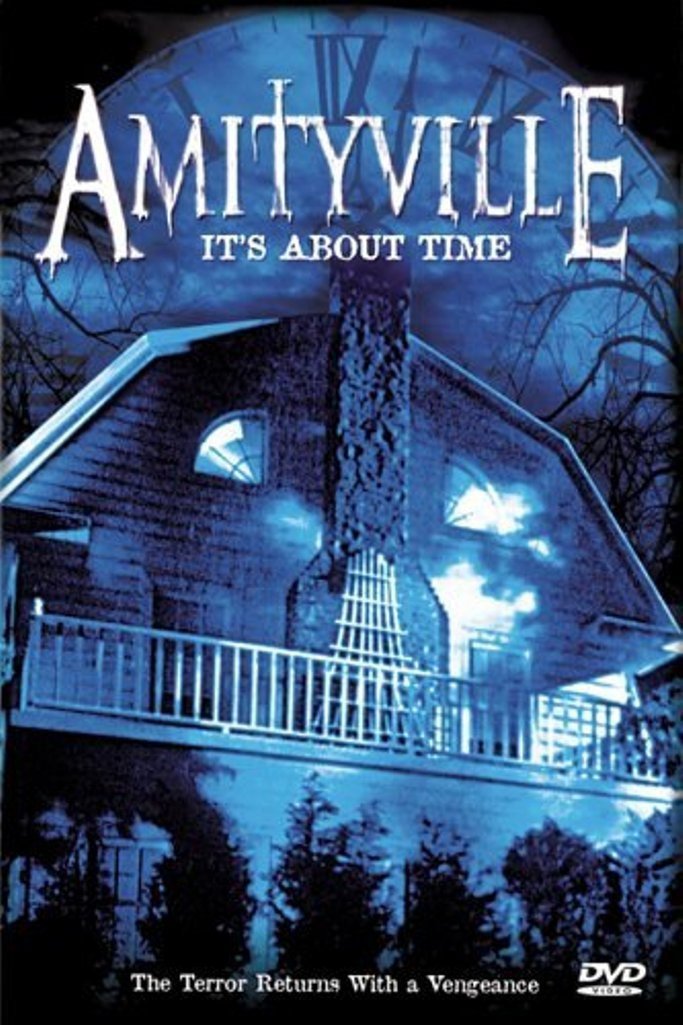 SYNOPSIS: Jacob Sterling brings home a mysterious clock from the infamous Amityville house, not knowing that it’s haunted by demonic spirits. – via IMDB

Alrighty. Well. It’s About Time. I wish that could have reflected the sentiments of this series coming to a grinding halt after all the terrible failures we encountered before it. Or that we finally got a film worth watching. Anything. Anything but this. I know that there (might) be some fans for this one, but I certainly was not one of them.

My fiancé even tried to stick one out with me, just to see what I was up to. This one was so ridiculous he laughed and took his valuable time and spent it elsewhere. And when I say laugh, I don’t mean in that joyous, love life kind of way. I mean in that seriously, WTF kind of way. Well. Surely that should have put things into persepctive? Nope, I was still spending my valuable time on the couch watching this.

Now truly, this is heaps better than that shitty predecessor. There were even some things I could deal with. But just as much there were things I could not comprehend. For one, this girl is seeing some psychiatrist/psychologist and she is banging her ex? And this new boyfriend of hers is alright with her staying with her ex, or even just his children (before he came home)? That is one seriously open relationship, if you ask me. Then let’s talk about those kids. Rusty made me cringe at the best of times, but he was the best character we got. As for the sister, Lisa? Not a fan. Didn’t help that she went super sexual later. It’s like the movie decided that if it couldn’t be good, it could be sold on tits and ass. Horror failsafe I tell you.

Anyhow, before you know it some #SatanicClock has moved in with them (again, another movie that is not set in the Amityville house?! What the fuck is going on?!) and pops has lost his architectural marbles and is obsessing over the Amityville house (seriously, he is building it everywhere and hanging dolls from it and painting Swatikas on shit… what the fuck man? Not cool). Only Rusty seems to want to know what is going on. Knows it, and isn’t really doing anything about it.

While we are at it, pops has one nasty ass festering leg cause of a dog attack that what, didn’t happen?! Peaches (the dog) was perfectly fine, so did dad maul himself? Is there another rogue dog in the neighbourhood running around with a sweatsuited owner?! Who knows these things?

Then there is the old lady that is friends with Rusty, Iris. She was there in the beginning, sort of trying to convince us that this: 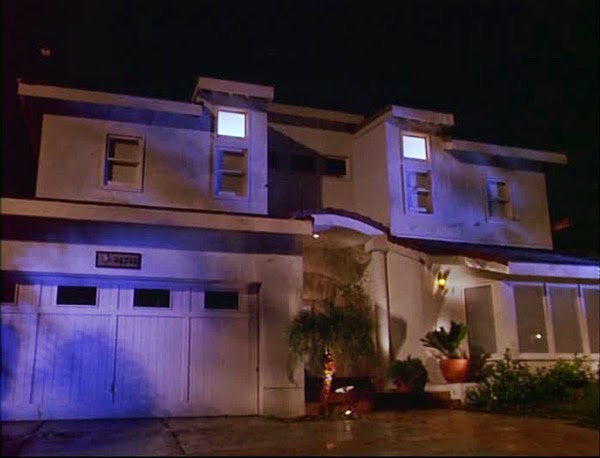 was sort of like this by overlapping the old creepy over the modern and new one:

Well, not luck or wins on that from my side, thank you. However, she was also the only other character that I liked. She was actually pretty cool, and I liked the friendship between Iris and Rusty. It was sweet. I hated the fact that the heroine/lead for this movie was Andrea because she was just… ugh. A pushover, and bitchy, no real direction, not even a little strong… embarrassing, if anything. 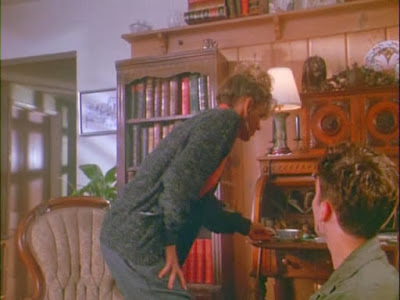 This movie didn’t really have a clear idea of what it wanted to be, and struggled intensely to explain the concept of time that it was working with, and how to sell it to us. It stumbled too much there, and I think if this had been written better, didn’t rely on it being about Andrea banging dad the whole time and sister Lisa getting all slutty, there might have been something here. Granted, the dialogue was cheesy as heck, but there were instances where they were almost onto something (the lounge flickering between the regular lounge and some torture chamber). They should have steered clear of attaching the Amityville name to this – sell us the clock, the evil spirit, the time theory, sell us that. Don’t sell us that this special #SatanicClock came from Amityville. You lost it there. And I am sure this is going to have that really awful B-movie charm for some, but it just wasn’t for me, though it has the potential to be made into a cheesy, charming B-movie…

I guess I’ll go out on a limb and say that I liked this movie. It’s certainly NOT good whatsoever but, I think, after watching the miserable number five this had some sort of innocent charm to it. Again this has NOTHING to do with the originals at all and even includes a heinous reference to “I got it from the house we tore down when we were building the subdivision” – meaning the Amityville house that was destroyed at the end of number 3. But I thought this was all right. It starts off with a middle aged man coming home in the rain. He greets his family – and his mistress – and shows them his newest acquisition from his travels – a clock he got from the house they tore down when they were building the new subdivision. Then he promptly shoos his kids off to bed and has sweaty sex with his concubine. The keen eye will notice that the first four movies were pretty much devoid of any skin but, there’s some blurry, dark, floaty boobs in the fifth and then in this one:

SOOOOOOOOOOOOOOOOO this fucking clock is haunted because it came from the not destroyed Amityville house and soon it’s possessing dogs and the father of the house and soon, the daughter who, one night, decides to sleep on the couch in the living room with the clock in it. She’s awakened in the middle of the night by some noise or such and sees her reflection in the mirror and, as we all do from time to time, she goes and poses in front of it and puffs her boobs up a little. Her haunted reflection then starts touching herself in her reflection’s privates and, just like always around here, her reflection reaches out of the mirror, cops a boob feel and then gives her a haunted orgasm. SCORE!!! 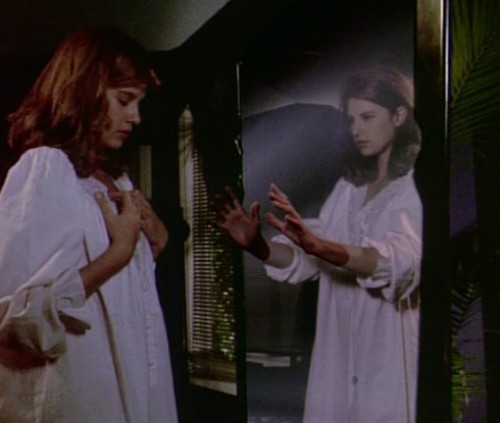 Later, now possessed, she seduces and lures the local jock down into her basement and disrobes on her family’s model train track. Again – this is pretty common for all of us so nothing’s weird there but, after she says something like “Come and get me big boy, CHOO CHOO!!!” our man takes off his clothes and sinks into some sort of tar, never to be heard from again. 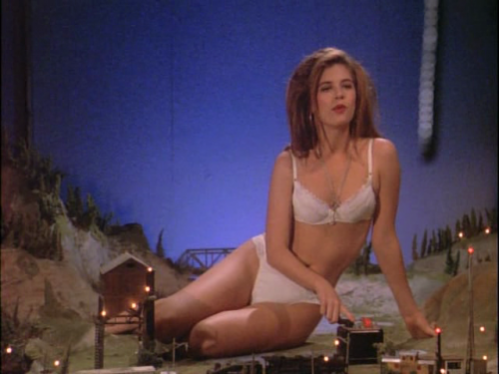 The main point to take from this, I believe, is that once again we have a shot of some male’s junk and, once again, it’s pretty impressive. Where do they keep finding these high school kids with suck large packages?

Of course, later we get to the big finale and it’s kind of a reach but, after it was over, I felt like I liked it. At one point, the father’s lover has taken a lover and the father confronts him. He shakes his hand and says: “Nice grip. Do you play squash?” I don’t feel the need to watch it again any time soon, but, hey, it’s better than the last one and number three. But, then again, it’s also a movie about a fucking possessed clock. 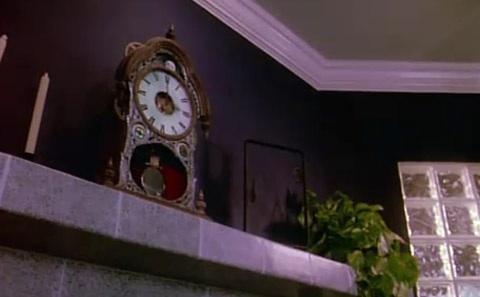