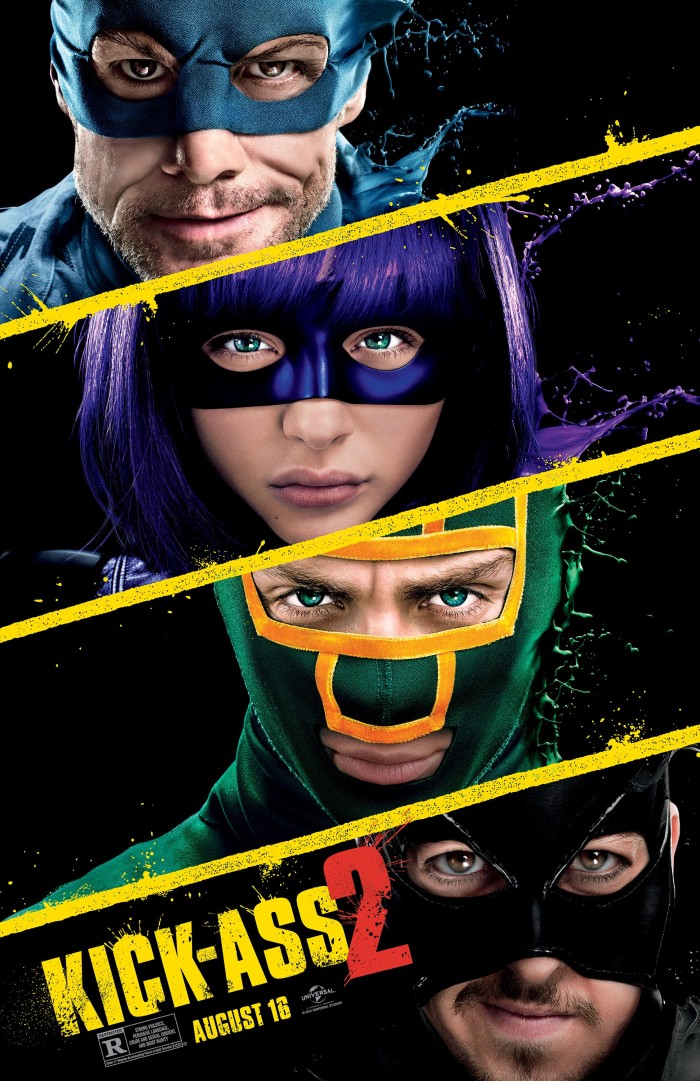 “You don’t have to be a bad-ass to be a superhero, Dave. You just have to be brave.”
– Mindy Macready

SYNOPSIS: The costumed high-school hero Kick-Ass joins with a group of normal citizens who have been inspired to fight crime in costume. Meanwhile, the Red Mist plots an act of revenge that will affect everyone Kick-Ass knows. – via IMDB

After loving Kick-Ass so much, I was wondering if this was going to reek of sequelitis (thanks Tom). I was surprised. It was by no means as good as the first one for me (though my other half preferred the oodles more action in this one), it was not a flop, either. I had a good time with it. There were plenty laughs, but I found this one to be so much less awkward and embarrassing than the first (something I thought was excellent for it), but more forced at other times. Big Daddy may be gone, but it seems that Colonel Stars and Stripes was there to take up the mantle of father figure. He was by no means as organised or as odd as Big Daddy, but it works on some level. I didn’t like the fact that Evan Peters didn’t come back to play Todd (but I can deal, American Horror Story was way more important), and I found Augustus Prew (his replacement) to be really bland. What I did like, and it had me in stitches for hours after, was Christopher Mintz-Plasse putting all that bondage gear on, and not having the boobs to fill out the rack space (bwahahahaha, it looked hilarious). I was really glad that this one scene that could have potentially ended in rape didn’t go there. It would not have gelled with the movie, and would definitely have left a sour taste in my mouth. There was definitely far more action in this one, definitely some more cheese. I had a good time watching John Leguizamo here, he had his head more together than most, though he humoured Chris way too much. The inclusion of so many superheroes didn’t really work all too well, but they had their moments, and the plot was a little all over the show at times. I think I am being significantly less harsh on this than most people (I don’t get the really bad rap this film has), but maybe because I saw these movies directly after one another over two nights, I didn’t have time to forge expectations, and I knew that no matter what, it was going to be lame, silly, over the top and not as good as the first. Maybe that’s why I still had fun.