Well guys, naturally things just took on a life of their own with Eric and I and the movie watching thing, and it seems that Potter and Star Trek were not enough – it occurred to us that there are so many other film canons out there – and they all need to be probed! The next up on our “JB & The Chop Present” feature is the Nightmare on Elm Street movies! I think this is just the perfect way to celebrate the end of exams!

SYNOPSIS: On Elm Street, Nancy Thompson and a group of her friends including Tina Gray, Rod Lane and Glen Lantz are being tormented by a clawed killer in their dreams named Freddy Krueger. Nancy must think quickly, as Freddy tries to pick off his victims one by one. When he has you in your sleep, who is there to save you? – via IMDB

I freaking love this movie, I think it’s awesome! Freddy Krueger is just one of those movie monsters that was destined to catch on and become famous. Everyone has nightmares, and everyone is afraid of when your dreams really become a dangerous place, which is why I think this concept worked so well. Freddy’s first outing was fantastic, and remains the best Elm Street film in the canon for me. The reasons are obvious: this film had a story to tell, and everything was fresh and new, and it was not yet a parody of itself. Horror film canons have managed to make that of themselves over the years.

Anyway, A Nightmare On Elm Street is just essential viewing if you like horror. You can totally skip the rest if you want, but this one had it all. I can imagine this must have been extremely creepy when it came out, and this one is also slightly more serious than the others that came later, though not as serious as that piece of crap remake.

There were some fantastic scenes here, and this film was gripping and entertaining from the off, and it was most certainly something fresh and new. You dreams are a dangerous place? Yes, please! It starts off innocently enough, bunch of teenagers, blah, blah, blah. Nothing revolutionary here except maybe seeing an extremely young Johnny Depp. Other than that, nothing remarkable. But that soon gives way to the terror that is Freddy Krueger, and it was the smaller things that made this creepy. I was a huge fan of the scene where you see Freddy start his games with Nancy. The way that wall moved and all was just a stroke of pure genius.

Papa Thompson was a real tool, too, and seemed exceptionally insensitive towards Nancy having lost her friend and all that was going on. Not saying she gave a viable explanation or anything like that, just saying he was way harsher than a father should be. Anyhow, the gore in here was not overly excessive (but that might be for ol’ desensitised me, you might have to check that at a more reliable source) but there is a lot, make no mistake, and the effects were really good for its time. I had a lot of fun with the way the film was directed and the way the cast handled the material. Granted, sometimes it suffered from (typical) flawed horror logic, and other times there was some seriously unbelievable acting and reactions, but overall I think that lends to the film, if anything.

When the movie catches and latches onto Freddy messing with these kids, the strange scenes star popping up in an abundance, and that alone it worth sticking around for, even if you completely ignore the rest of what is going on. Let’s also just talk about Robert Englund: he is the only Freddy I will ever acknowledge because he is perfect in the role. He’s so iconic, too, making it damn near impossible for anyone else to helm the fedora and striped sweater, try as they may. He has become inextricably linked to him, and that is cool too. I know Haley tried with the 2010 remake, but seriously man, what the hell kind of Freddy is that?

There were some really awesome deaths in A Nightmare On Elm Street, memorable and awesome, and broken and disturbing as that may sound. Yes, I am sure that you can tell, I love this movie, and it is a classic for a reason. There may be flaws, but overall Craven delivered a solid monster and a good concept with plenty gore and a cool story. Don’t waste time. Rectify it now if you haven’t seen it, or just go watch it again. 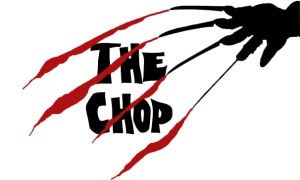 I think I should start this off by saying that, unlike our last project, I’ve only seen two of these – this one and the third one – as a challenge from another bloggy person. I remember liking the first one OK but I thought the third one was a little silly and the way I remember seeing all of the commercials for these things was Freddy spouting cheesy one liners that deterred me from having any real desire to see them, in the theater or elsewhere. So, when our last project was winding down and we both agreed we wanted to do another one, JB suggested this as she loves these movies and who am I to say no to The Most Beloved JB??? So I bought the set for pretty cheap off Amazon and popped in the first one the other day and it was going pretty good until I saw this:

What the FUCK is Freddy doing running like that????? Is he getting ready to hump a barrel full of pickles or something??? I seriously did some LOL-ing and thought, “MMM HMMMM this is what I fucking thought!!!! This shit is going to be so stupid!!!! I’m going to have to give JB a lashing (or something)”. Then this happened:

That was pretty fucking impressive and got me excited for the rest of the movie!! I do love it when people go flying off and spinning around in the air! For real! So we had that goodness and then that scene in the hallway that JB captured up above was pretty fucking sweet and then, unfortunately, there was a little bit of this:

And I was all:

EWWWWW What the fuck??? Really??? but then there was some of this:

And I got too see a boob, so that was redeeming. But then it ended on kind of a dodgy note:

In any case – I liked this one pretty much! It’s not going to beat out Halloween as my favorite start to a horror franchise but I thought most of it was pretty good – with a little cheese thrown in. This was VERY bloody – surprisingly so IMO. But I will tell you this – I sure had fun putting together this post. I’ll tell you something else – I need a fucking haircut!