So I have been chewing on this idea for a while now, and I have decided that I will be putting out some character tributes for characters I have particularly enjoyed in a movie or a series. I thought there would be no better way that to start this segment off with a bang, giving Eric Northman the spotlight! 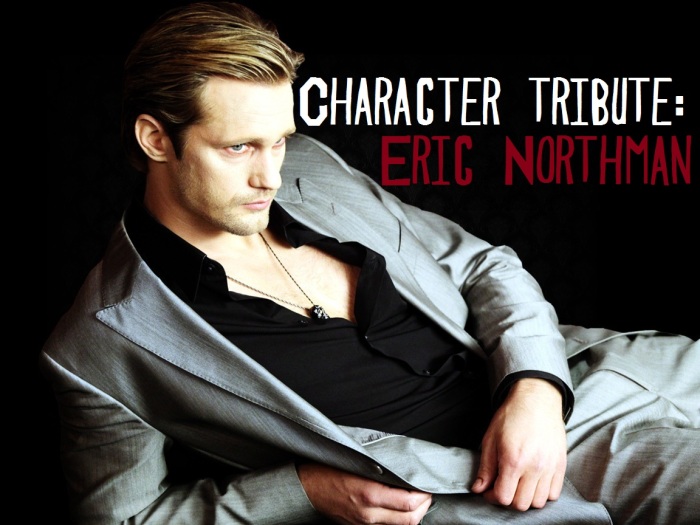 Whether you liked True Blood or not, it cannot be denied that whether things were good or bad, Eric Northman was a damn entertaining character all round. He kept me watching until the fairy crap, and then I went off the show, then I got back on it, and I must confess, it was still Eric that had me coming back for more and more and more. Portrayed by the delectable Alexander Skarsgård, Eric is sassy, cocky, cheeky, indifferent and just plain down fabulous. I decided I will talk about some of the reasons I love him, though in no particular order.

The way he could always make an entrance.

Every time he got in Bill’s hair, it was like big points for you my friend. He was not even subtle about it. The two were great when they got on one another’s nerves.

Eric’s relationship with Pam. This is something that I have spoken about before, and this is no exception. I absolutely adored the two of them together. Eric, always indifferent and cruel and cut off from the world, was a whole different creature when Pam was involved. When things went right, they were always sniping at each other, but in a soft way. When things got serious, you could see how close they were.

Eric’s ascention into the modern day and age, and how he can sometimes pass for being normal.

His absolute and unwavering loyalty to Godric. Crushing.

Whenever Eric is over listening to someone and he just moves on to other things… how do you blame the guy?

His amazing on screen persona, there is just a dash of regular Eric under the business and caring facade presented to the public, and I like that.

The reading… in a leather jacket. And those eyes. The hair. The looks. All of it. Eric didn’t even need to open his mouth to dominate a scene.

He is not all up to date with the times, and doesn’t have time to wade through all the jargon. Cut to the chase.

No matter what, Pam and Eric were always in it together.

When Eric shares something deeper, it always shocks you.

Drunk Eric was so amusing.

When he kissed Pam, and I was finally satisfied, and knew that they were perfect in every single way.

When sarcastic Eric makes an appearance. Always worth checking out!

The way he could wear a tracksuit and it didn’t even faze me.

How he just couldn’t stay too serious for too long.

That time Eric wanted to drive, and dropped in to ask it.

Throned Eric. Has anyone ever looked that fine while brooding atop a throne in a strip joint/bar? I think not. But nevertheless, the location was unimportant, Eric sat on that throne like the Viking king he was.

Subservient and displeased about it, Eric was not a fan of being Bill’s underling. Without outright telling him that, it was the smaller, more sarcastic gestures that made this perfect.

The way he says some things, and manages to get away with it.

Every time we were rewarded with this…

Whenever he did something out of character, he still somehow managed to make it work.

He provided the best cleaning service you could possibly hope for.

The time he showed up at the Governor’s mansion looking like this:

The way he recognised Ginger purely by her scream, and went back to save her.

Through the ups and downs of the show, I will have to admit that Eric was a large reason I stuck around. Farewell!