While the older part of the Alfred Hitchcock Blogathon that Rob and I are hosting swiftly moves on, my partner returns with a review of a (thankfully) talking movie this time. Rob has been on a steady Hitchcock diet for a while now. If you don’t already follow his site, you should drop by sometime and change that! 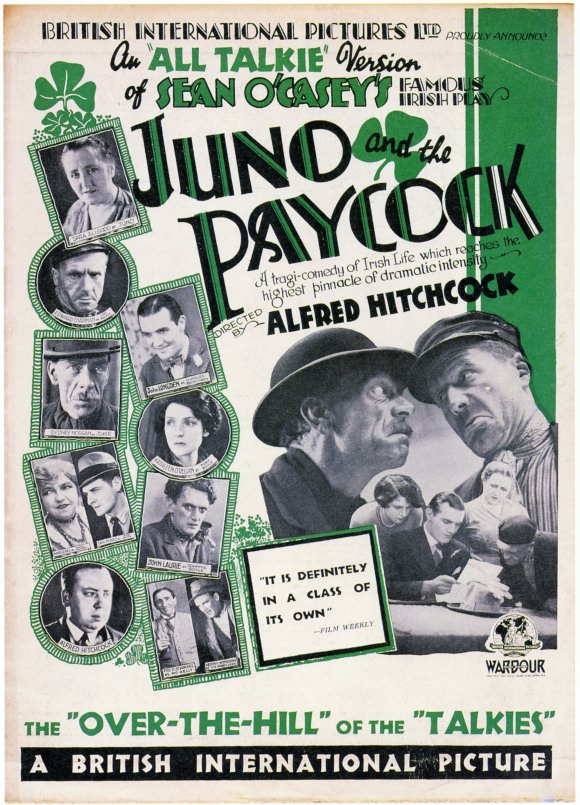 For the 10th review of our Alfred Hitchcock blogathon (ad the final one for this week), I bring you once again another review by me. 🙂

This time, here is what I thought of Hitchcock’s very first film with sound; Juno and the Paycock (1930)

Once again, Hitchcock gave us another boring movie that has little suspense or thrills.  This was basically a very boring 90 minutes that I had to struggle to keep my attention from drifting.

It’s fitting that I struggled thru this because the plot is about an Irish family struggling to survive thru the Irish Revolution.

Throughout the movie, we hear gunfire every so often that doesn’t sound to be happening so far from the family’s house.

The story is about a family living in the slums of Dublin – father (Captain Boyle aka Paycock), mother (Mrs. Boyle aka Juno) and their two children Mary and Johnny.

They receive news that they will get a handsome inheritance, but it only leads to disaster as things just get worse and worse for them as they spend the money not yet in their hands.

This movie deals with numerous themes including pregnancy out of wedlock, informing on neighbors and not considering consequences of your own actions.

There are numerous scenes where it is clear that Hitchcock is at the helm because the camera shots are closer to what we have grown accustomed to seeing from him.  Many shots are longer than what people were used to seeing at that time and you can recognize his handiwork.

This movie is also known in some circles as The Shame of Mary Boyle (which I think gives away too much, because who the hell knows what a Juno or a Paycock are)

Unfortunately, this is another early Hitchcock film not worth the time watching.