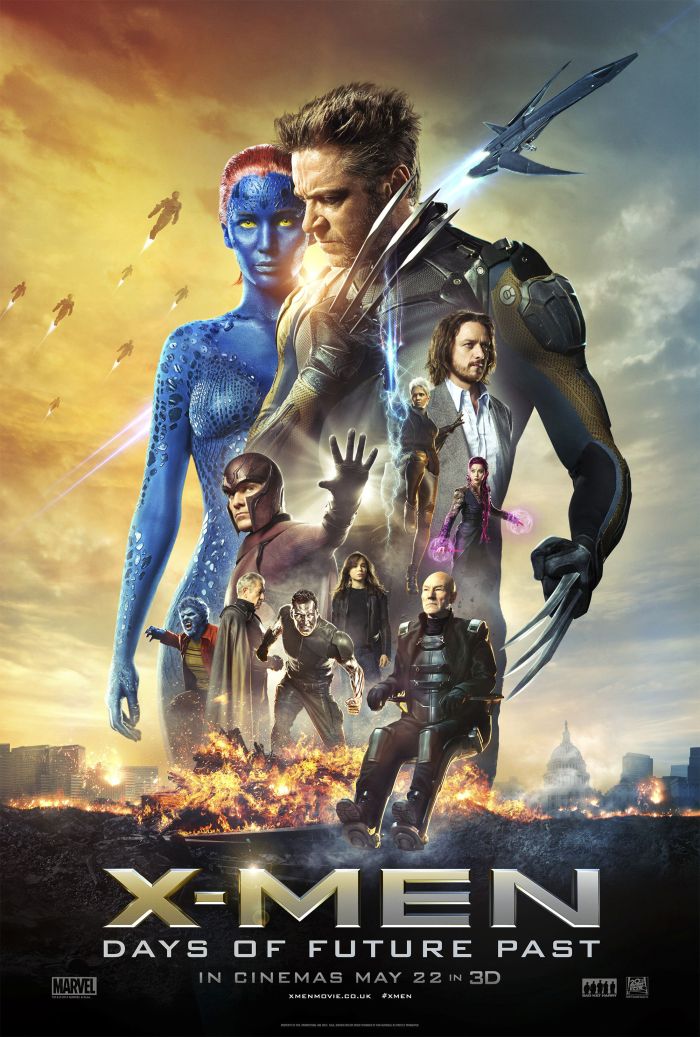 “The future: a bleak desolate, place. Mutants and the humans who helped them, united in defeat by an enemy we could not stop. Is this the fate we have set for ourselves? Could we have done nothing to stop it?”
– Professor Charles Xavier

A dystopian future of bleak proportions play out the days of the remaining mutants. Made made Sentinels are tracking and hunting down the mutants. Mutants and people who attempted to help them have been captured, they are being butchered and hunted and murdered. Their race is nearing extinction. Kitty Pryde (Ellen Page) works with Bobby “Iceman” Drake (Shawn Ashmore), James “Warpath” Proudstar (Booboo Stewart), Peter “Colossus” Rasputin (Daniel Cudmore), Roberto “Sunspot” da Costa (Adan Canto), Clarice “Blink” Fergusen (Fan Bingbing), and Bishop (Omar Sy). They have been relatively successful at avoiding the Sentinels and their tracking beacons. They meet up with Charles “Professor X” Xavier (Patrick Stewart), Erik “Magneto” Lehnsherr (Ian McKellan), Ororo Storm Monroe (Halle Berry), and Logan, a.k.a. Wolverine (Hugh Jackman). Kitty is asked to send Charles’s consciousness back to the seventies, when Raven “Mystique” Darkholme (Jennifer Lawrence) killed Boliver Trask (Peter Dinklage), setting this entire debacle in motion. Mystique’s DNA is also what has made the Sentinels so strong. Charles knows his body will not survive it, and Wolverine steps forwards. His body can heal quickly, and he decides that he will be the one that will have to do what he can to make it right.

Returning to the seventies, Logan visits Charles’s school, but finds it shut down. He runs into Hank “Beast” McCoy (Nicholas Hoult), and a fight ensues. Ultimately Logan gets to speak to Charles (James McAvoy), and is shocked to find him walking around, but it seems he is powerless. He is taking a serum created by Hank which allows him to walk but blocks his telepathic abilities. Logan cannot understand how and why Charles is such a shattered man, embittered, twisted, furious with the world. Ultimately Logan convinces Charles that he needs his help, and that his older self and Erik have sent him from the future. They need to get Erik (Michael Fassbender) to help, though he is imprisoned at the Pentagon. Enlisting the help of Peter “Quicksilver” Maximoff (Evan Peters), they break him out. Naturally he and Charles have got issues with each other, but they really need to find a way around them so as to work together to stop Raven, to prevent the ghastly future that Logan has come from. He also does not have a lot of time, seeing as the Sentinels are tracking them in the future, and if they find them there will be a problem.

Trask is having serious getting his Sentinel program approved, and it getting progressively angrier about it, as he perceives mutants to be a terrible threat. Tracking down Raven proves to be a bit of an issue, and nothing about their intervention goes even remotely as planned. Erik has a different idea about saving the future, and attempts to kill Raven after stopping her from killing Trask. Charles is angered, and Logan is losing his tether to this era and really needs to make it back to them. Trask has scraped some of Mystique’s blood off the pavement and is working with Major William Stryker (Josh Helman), but they need more DNA. The world witnessed the bloody fights in detail, and are terrified now that they know mutants exist. President Richard Nixon (Mark Camacho) calls for the execution of the Sentinel program. Mystique needs to recover after having barely escaped Erik’s intentions. Logan, Charles, Erik, and Beast need to find a way to fix what has happened, but they all seem to have other ideas about how they are going to go about it. Logan has to convince Charles to regain his abilities, to make a difference, though Charles seems to have no desire whatsoever of getting back on that track. Charles, meanwhile, is desperately struggling to get through to Raven, to express his apologies, to make things right.

Will Charles be able to salvage things between him and Raven? Will Erik always have the outlook on the world that he does? Will he and Charles find a way to work with each other? Will Logan be able to band them all together on time and have them change the past, to impact the future? Will Charles give up the use of his legs to harness the power of his mind? Will they be able to create an alternative future, one where mutants are not hunted and slaughtered, where they live in freedom? Will Mystique successfully kill Trask?

I must say that I was exceptionally impressed with this. This was a fine return to form for the franchise after that awful Wolverine film of last year. Hugh Jackman reprises his role of Wolverine and impressed me endlessly. Then there was the combination of bringing Ian McKellan and Patrick Stewart back for their roles as the older Charles and Erik, and crossing that with the younger versions of themselves, portrayed by James McAvoy and Michael Fassbender. It was amazing to see the two separate generations combined in one film. The effects in this film were amazing and definitely assisted with the thrill ride. The dystopian future which the mutants find themselves in really is dreary and depressing. Seeing Charles and Erik united once more was something to see, always being the best of friends but always being on completely opposite sides. The performances were fantastic, and there was plenty of humour considering the serious subject matter, but that never stopped it from being intense. I really, really liked the plane scene, the reasons Erik and Charles both had, it was one hell of a scene. Evan Peters as Quicksilver is something that I really did not see coming. I adore Peters as an actor, he amazes me, and I was sure he was going to do the best with the material that he had. However, I had no idea that the material was going to be so great, and he was truly a showstealer every second he was on screen. The concept of the film was great, and wasn’t too intense to wrap your mind around. Seeing Charles in his confused state as his younger self was a difficult thing to watch. Angry, embittered and sour, McAvoy truly delivered in his role. Fassbender, too, impressed me endlessly as Erik, imprisoned and furious. The tension between the two was quite heavy, and McAvoy and Fassbender truly sold it. Wolverine was funnier in here than he has been recently, though I have no issues with seeing a serious and dramatic Logan, it seems that the fans only want the lighthearted man, cocky and sure of himself. Then there was the whole Sentinel story, which was exceptionally interesting, coming together extremely well. Lawrence delivered another solid performance as Mystique. Definitely worth hauling out your cash for and seeing in theatre, X-Men: Days of Future Past delivered far more than expected, delivering a solid film for the year!