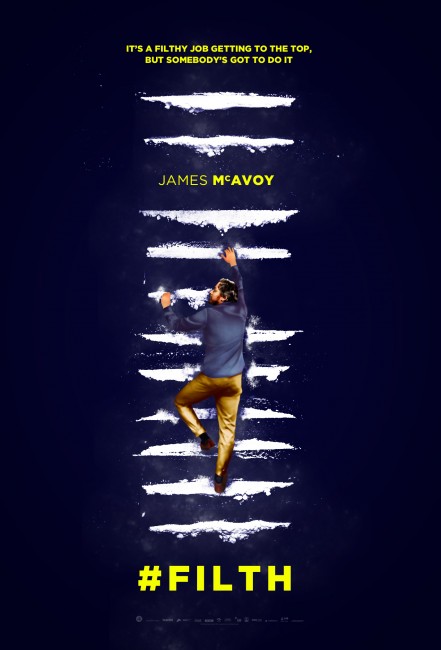 SYNOPSIS: A corrupt, junkie cop attempts to manipulate his way through a promotion in order to win back his wife and daughter while also fighting his own inner demons. – via IMDB

This perfectly sums up the movie (which is freaking fantastic):

Now, I didn’t really have a clear idea as to what this was, just that someone was going to be taking a lot of coke. Everything indicates that. Then the story started unfolding, and it was nothing like I was expecting, but I was hooked. I can listen to James McAvoy go on for ages, he is just amazing, and this movie was no exception. He was enthralling and reprehensible at the same time but kept you guessing as to what was going on, the story with his wife as well as rooting for him despite the fact that he is a tool. The characters that surround him added to the story, and the events as they transpire are never boring. What starts as an incredibly entertaining comedy quickly gives way to darker humour, more serious, and then total anarchy of the mind, and the trip is totally worth taking with Bruce. As reprehensible as the man is, you sort of continue to root for him to get his life back together. I felt so sorry for Clifford Blades, he was so awkward and a genuinely decent person, and it was rough to see how things went with him and Bruce. I thought the story progression was very good, too, and I enjoyed the camera work. The film entertained me no end and had no dull moments and delivered exactly what the title would suggest. It was done very well though, and never actually had me squirming and uncomfortable, which says to me it wasn’t the way it was just to be disgusting, there was actually a point to it. I liked the performances all round, though the best for me was, undoubtedly, James McAvoy, though he is closely followed up by Eddie Marsan, whom I thought was perfectly cast. I cannot explain it to you, he just sold Clifford to you. I also liked the little plot twisty thing that came in later. I didn’t really expect it and I loved it! The score also worked exceptionally well for this film. I found this to be a fantastic movie and I would highly recommend this, though probably not for overly-sensitive viewers, it might be offensive. Had I seen this last year it would certainly have made my top ten film list!