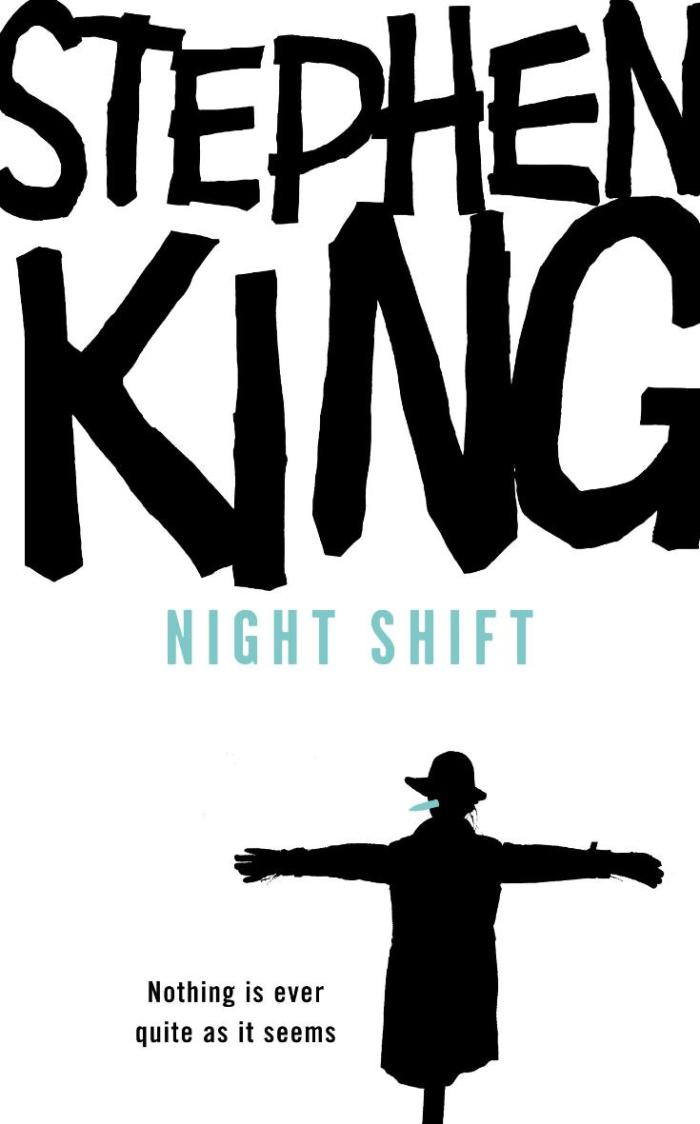 Night Shift is a collection of short stories that Stephen King has written. Each and every story had its own characters and its own events and was very well strung together. I am not exactly quite sure how to review this, so I have decided to simply list each book and a quick description of what it was.

Jerusalem’s Lot: A man moves into his familial home and writes to his friend, but soon realises that the villagers are terrified of his home and the history behind it, though they refuse to tell him what that is all about.

Graveyard Shift: Over a Fourth of July weekend a whole group of men from work are pulled together to sort of the basement of their building for extra cash, but their clean up soon reveals far more than they were prepared to deal with.

Night Surf: A small group of people are together after it the world’s population seems to have been wiped up by a strange virus. They are among the only remaining survivors of the deadly disease.

I Am The Doorway: A retired and crippled astronaut tells a fantastical tale to his friend, fearing that there is something terrible on the go, something that he is a part of and has no control over – something he definitely blames on his last space expedition. His friend does not believe him until confronted with undeniably strong proof.

The Mangler: A Laundromat encounters problems when there seems to be numerous bloody accidents around an industrial machine which is used to press towels.

The Boogeyman: A man visits a therapist to get his story out about the events that led to the suspicious deaths of his family.

Grey Matter: A young boy enters a convenience store and is terrified, and tells a chilling tale of his alcoholic father that has certainly become infected with something, and the locals draw their own educated conclusions that the boy’s father may very well be behind some disappearances in town.

Battleground: An assassin returns home after his contract of taking down a toy maker. Discovering a package when he arrives, he is in no ways prepared for the assault that is to follow, and will need to keep his wits about him more than he could ever imagine.

Trucks: The human population has got issues when one day it seems all large automobiles seem to have gained life of their own and are taking over the world, killing and/or enslaving all the people.

Sometimes They Come Back: A teacher starts a new job at a new school after a psychological break, but soon some strange students come calling, students from a past that have no business following him, students that could not possibly be where they are.

Strawberry Spring: A man recalls a period eight years previously after seeing a newspaper article that reminds him of the false summer (Indian Summer) that they had a few years ago, but also of the terrible series of murders that occurred and could seemingly not be stopped, and just suddenly ended when the Indian Summer did. The man wonders if the same fate will be suffered again.

The Ledge: A man confronts his lover’s husband and is set with an ultimatum: he can have the other man’s wife if he walks along the ledge that runs around the building in a specified amount of time. If he completes it, he will walk away with a substantial amount of cash, his life, and his lover’s freedom.

The Lawnmower Man: A man whose garden used to be his pride and joy allows it to become a little overgrown jungle. Deciding one day enough is enough, he calls in a garden service, and a sizable man comes to help him. However, the service that he got was not quite the service he was expecting.

Quitters, Inc.: A man runs into an old school friend who is looking well, given up smoking and has a wonderful life. The friend recommends that a company be used to help the man quit smoking, who is not serious about it but makes an appointment anyway. However, the meeting that ensues takes that choice clean out of his hands about whether or not he still wants to smoke.

I Know What You Need: A young man befriends a girl that he is incredibly interested in, and he seems to know exactly what she needs before she needs it. The girl has a boyfriend though, and he stands between the young man and the girl of his dreams. What lengths will he go to in order to be with her?

Children of the Corn: A couple gets lost on the way out of town where they will “work” on their relationship. Lost on a highway, they run over a child. The husband ascertains that the child’s throat was actually slit. The couple moves on to the closest town to report their findings, and instead find a ridiculously deserted town that gives them the chills. Something lurks in there.

The Last Rung on the Ladder: A brother is completely guilt-ridden over the life his younger sister had led, and recalls an afternoon of their childhood in an attempt to pinpoint where in her life things went wrong, and how he was not there for her as much as he should have been, as well as the latest burden her last letter has brought to him.

The Man Who Loved Flowers: A young man captivates the attention of virtually everyone he passes, and even buys flowers for the love of his life. His attitude is loving and completely infectious, yet underneath something unseen lurks, desperate to make it to the surface.

One for the Road: Two old men are relaxing and drinking one snow swept night when an out-of-towner comes bursting in with a mild case of frostbite, screaming about how his car went off the road and how his wife and child are still in in waiting for him. The locals are very reluctant to help the man due to the inexplicable and evil things that lurk in the dark just outside of town, but decide to help the man anyway.

The Woman in the Room: A man is dealing with many personal issues, the most prominent being his terminally ill mother. The man makes the impossible decision – he will use painkillers to euthanise his mother.

This is a solid compendium from a brilliant author. The stories were pretty short, making this book feel like it simply flew by. There was more than one occasion where it occurred to me that something was terribly off and disgusting, which I am sure is what King was going for. I enjoyed the stories that were chosen to feature in here and there was not one boring one for me. King manages to weave an intricate web through numerous stories, people, places and object, and manages to keep you spellbound from the off. I know a lot of people don’t necessarily like hauling through an entire Stephen King novel, but I know that the short stories should definitely pique your interest and be looked into. There were some ridiculously fantastical stories, some that were more psychologically thrilling, some that were something directly from your dreams… there was basically a horror story in here for everyone. Another fun read for me, and something I would recommend.