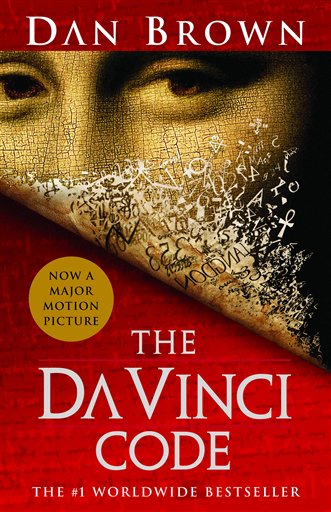 Louvre curator Jacques Saunière is murdered at the museum and leaves a puzzling message for police captain Bezu Fache. A puzzling code and a post script to find Robert Langdon, who just so happens to be in Paris on business. Langdon is called in, and soon police cryptographer Sophie Neveu turns up, who is Saunière’s estranged granddaughter. She informs him subtly that Bezu Fache has in actual fact decided that Langdon is the killer, and that this is a formal interview. She assists Langdon in a great escape from the Louvre featuring much deception while at the same time recovering as many clues that Saunière left for Sophie as possible, and the two run rampant across the streets of Paris looking for sanctuary now that Langdon is a fugitive.

While out an about, it soon becomes evident that Saunière was the Priory of Sion Grand Master, charged with the protection of the Holy Grail. Suddenly his murder takes on a whole new meaning. With all the clues that they gathered at Saunière’s murder scene, Langdon and Sophie follow the trail to discover a cryptex in the Depository Bank in Zurich. This is the Priory keystone, and is a massive breakthrough in history. The hunt is now on, seeing as whoever killed Saunière killed him for the information of finding this box, and that is now a mission. Sophie learns about the history of the Priory of Sion as well as the Holy Grail, and what is really represents: Jesus Christ’s bloodline through the ages, passed down between him and his wife, Mary Magdalene.

Sophie struggles to understand what this has to do with her family, and all the time they are being hunted by Silas, a Catholic monk with ties to Opus Dei, a religious sect. He works for the Teacher, who is desperately looking for the keystone and all the answers on the Holy Grail, and will stop at nothing to get them. After being branded fugitives, Sophie and Langdon need a safe place to go to, and Langdon takes them to his friend and colleague, Sir Leigh Teabing, an avid historian and one of the foremost authorities on the Holy Grail. They need his help and they need his expertise, and they are lucky to come across him. So a journey across continents begins, fast and desperate and with so little time left to solve a riddle that is centuries old, but they are determined on doing it, and intent on doing it correctly.

Will they be able to solve the puzzles of the cryptex and utilize the keystone? Will they actually be on the truthful path of the Holy Grail, to uncover the secrets that have been buried for centuries? Will they escape the deadly assassin that is hot on their heels and being driven by a higher power he firmly believes in? Will Robert ever be able to shake off how guilty he looks to the world that he has run from an arrest?

The Da Vinci Code was not nearly as good for me as its predecessor. While it is alright, with a decent story and plenty of information to absorb, people must not get carried away when reading this. It is researched fiction with a conspiracy spin on it, nothing one hundred percent serious or one hundred percent accurate. As I have said before, Dan Brown may not be the greatest writer of all time, but he writes solidly. There was some humour in this book, I think mostly between Sir Leigh Teabing and his manservant more often than not, but there was also an inordinate amount of data presented to the readers. Really not bad, but just not as tight and as well executed as Angels and Demons. Again, no real character growth, just a pair to carry the story for you, which is perfectly alright for this genre.