A young married couple, Frank (Adam MacDonald) and Sara (Meghan Heffern), return home after a date night. They have left their infant son at Sara’s mother so that they have their alone time. However, while they were out, a killer has invaded their safe haven and stripped them of their sanctuary. Going through what looks like well-practiced motions of preparing the evening, the killer (Shaun Benson) has the windows screwed shut and bolted, deactivating the alarm, cutting the phone lines and goes through all their possessions and gets to know the family. 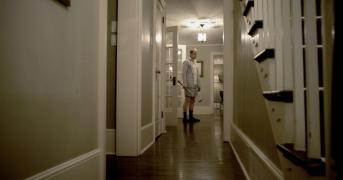 Upon their return, they go about the night regularly, chatting, laughing, showering and doing their thing. The killer takes this moment to be the prime moment to take out Frank, though I feel that it was very rapid and rushed. Sara is the next target, though she is not to be killed so suddenly. The killer binds her to with cable ties, and insists on putting lipstick on her and taking photos of them together, almost like their very own date night.

Desperate to escape, Sara soon starts retaliating and thinking further than just crying. It is soon established that Frank was not dead but is butchered by the killer when trying to call for help. Scalping Frank, the killer drops the scalp into Sara’s lap, and she freaks. The killer encounters unforeseen circumstances that affect his perfectly planned night when the security company sends a security guard (Marty Adams) to investigate why the silent alarm was triggered. During the killer’s distraction, Sara manages to escape and get to a phone and calls for help while the killer is hot at her heels to find her.

Will Sara be able to outsmart the killer until help arrives? Will the security company react fast enough and send out help to save a woman who has just had her life ripped apart? Who is this methodical killer and why does he do the things he does?

A 4.5/10. So many reviews said this was great and I was excited to see but I have to disagree. Look, the camera work was fantastic, and the gore/blood looked very good. The end of the movie saved the entire film a bit for me, though the ending was pretty much preposterous. This movie was one that I wanted to like, but just could not get into all the way. It entertained me in that sense of “run, dammit, run!” and “what the hell was that?!” and “shhhhh!”, which is something I have always loved about horrors and psychological thrillers, but then an inordinate amount of the logic was so broken I was stunned. Look, some random tool breaking into your home and doing such terrible things is never what anyone wants but it is like their survival instinct went right out the window. Fight back. Unlock the gun first before making stupid moves, stay on the line with your security company, and barricade yourself in a room! Also the movie took forever to start and didn’t progress at a decent pace at all. It was just over thirty two minutes in when anything finally started happening, and it was not like the preceding thirty two minutes were very much of anything except excruciating preparation and some daft talk after coming home from a date night. The movie was not the worst horror/thriller of all time, but lacked a kick to make it fresh. The concept was same old, but I sincerely felt a lot of the time that this belonged on Eric over at the IPC’s WHY list… truly!