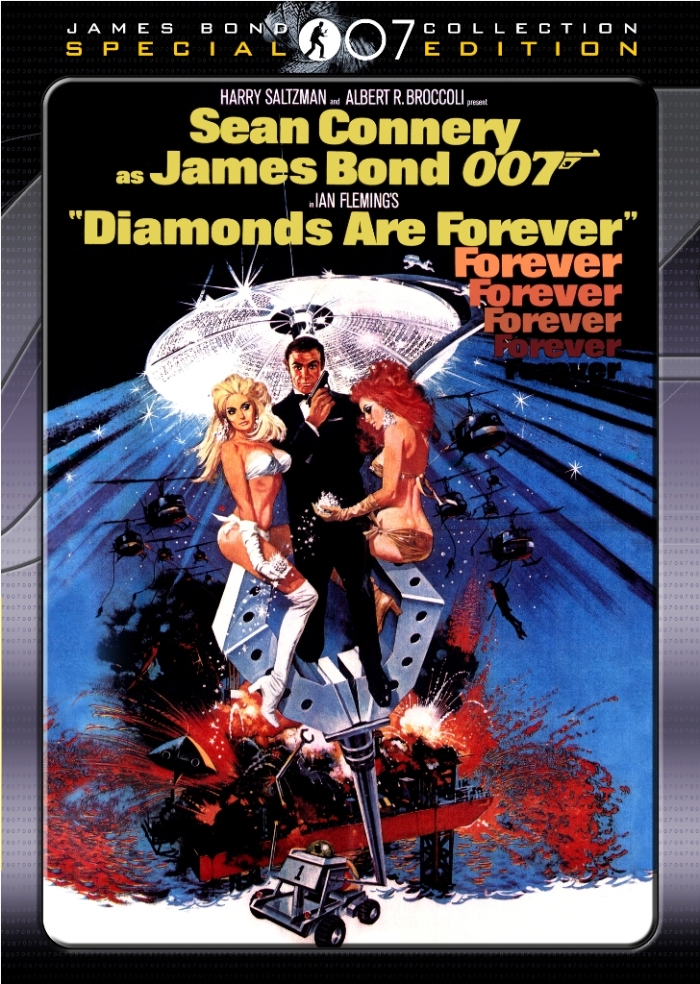 James Bond (Sean Connery) is on a mission to pursue and finally stop Ernst Stavro Blofeld (Charles Gray). He tracks his nemesis down where he discovers that Blofeld is conducting surgeries to create lookalikes of himself. Bond kills Blofeld and thinks he has closed that chapter of his life. A diamond angle comes to the fore when diamond smugglers are being exterminated. M (Bernard Lee) puts Bond on a mission to take down a smuggling ring as he is sure that they have an economy-crippling plan up their sleeves.

Bond pretends to be smuggler Peter Franks after MI6 captures him and meets with his contact, Tiffany Case (Jill St. John), in Amsterdam where they discuss business dealings. Franks escapes and causes Bond a slight issue, though Bond takes care of him and plants his own identity on Franks, making it look like he killed the MI6 spy. Bond smuggles the diamonds into Los Angeles via Franks’ corpse, and meets with CIA Agent Felix Leiter (Norman Burton) where they exchange the real diamonds for replicas.

Bond is almost killed trying to pass the diamonds on to the next smuggler on the list when assassins Mr Wint (Bruce Glover) and Mr Kidd (Putter Smith) make an attempt to neutralize him. Smuggler Shady Tree (Leonard Barr) saves Bond when he realizes the diamonds on Franks’ body were fakes. Bond tracks the diamonds to Las Vegas to the Whyte House that is owned by a reclusive billionaire, Willard Whyte, who has not been seen for five years. Wint and Kidd kill Tree at the casino-hotel, not knowing Tree was carrying false diamonds. Bond meets up with Tiffany Case again, and she plans to steal the diamonds and run with him.

Bond discovers a research laboratory owned by Whyte. There he meets Dr Metz (Joseph Furst), a laser refraction specialist. Alarm bells start ringing in his head. At the Whyte House, it becomes apparent that Bond did not kill the real Blofeld when he meets two of them, one undoubtedly the real one. Narrowly escaping the assassins that Blofeld has arranged, Bond enlists Q’s (Desmond Llewelyn) help to trick Blofeld into disclosing Whyte’s location, and rescues the real Willard Whyte (Jimmy Dean). Blofeld has kidnapped Tiffany Case. Bond and Whyte work out Blofeld’s plots and plans and how the diamonds fit in.

Will Bond be able to foil Blofeld’s master plan once again? Will he be able to kill off the proper Blofeld this time as well as put a stop to a his nemesis for one last time? Will 007 be able to avoid Wint and Kidd while on his latest mission?

A 6.5/10. I was torn between liking it and facepalming. There was plenty cheese and uselessness going on, and then at the same time there was a certain amount of genius to be had. For instance, I loved the moon buggy theft and chase, though I thought the little trike-wheeler things were a bit ridiculous. Whyte was entertaining, I did enjoy him a lot, and the assassins were so weird all the time. The effects were pretty questionable at times, and then others they were fine again. There was, naturally, a lot of cheese again, but not the terrible kind. I enjoyed the concept of what was happening in this one, and I must admit, I found Plenty O’Toole to be rather annoying, though I laughed a lot at the window scene. I mean really? The scenery passing when it vehicles is done far better again. Diamonds Are Forever kept me entertained, though as I said I am a little bit confused as to whether I liked it a lot or just enough. To be honest, it was decent. One of the more enjoyable ones in the last few that I have seen. The way it was shot was also alright, looked nice and was put together rather well, and the setting for this Bond was nice (the whole USA setting). Not bad, truly.